September 1, 2015 - Known to locals as Abby Senior, the new Abbotsford Senior Secondary School has achieved such sustainability that the school district developed a special Green Tour just to show off its engineering and technology. 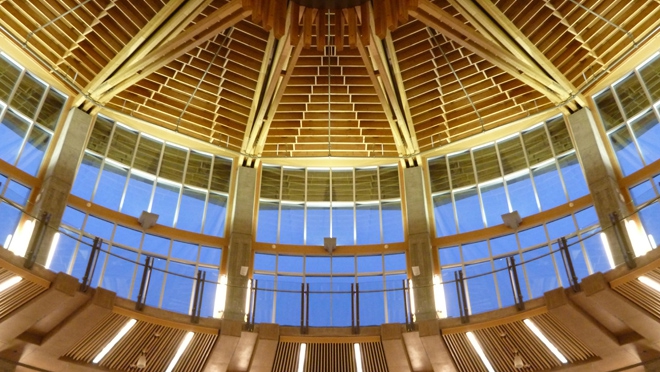 While energy efficiency was a focus of Abbotsford Senior Secondary's upgrades

Some of that technology was delivered on the recommendation of BC Hydro’s New Construction Program, and it has helped make the building 33% more energy efficient than it might otherwise have been, according to the utility.

After 60 years, it was time for a change

Located near the centre of downtown Abbotsford, B.C., the old Abby Senior was built in 1952 and, while it had been renovated, partially replaced and added to over the years, the main body of the school was deteriorating rapidly, according to Bob Mainman, assistant facilities director for School District No. 34.

“It turned out that it was more economical to retain a few of the newer sections, two gyms and some classrooms, and build the rest new—and better,” he says. “We had the opportunity to make the new school a school to be proud of, that the students would really like to come to every morning.”

But the school district had even larger ideas for the campus, which also includes Abbotsford Middle School, says Mainman. “We wanted the new Abby Senior to be a gathering place for the whole community—a place where everyone would feel they belonged.”

Now, the new building houses not only the secondary school, but also a public library, a community arts centre and offices for a variety of community services, including a health clinic and the United Way.

School District 34 also wanted the new Abby Secondary to be a model of how to build responsibly, sustainably and energy efficiently—even on a limited budget—which is where the BC Hydro New Construction Program came in.

Energy-modelling study proves the value of ‘what if’

The New Construction Program provides funding for an energy-modelling study, a simulation of how a building might function throughout a year if it’s designed and built with a variety of energy-conservation measures, along with additional financial incentives for implementing those measures.

“Doing an energy-modeling study with BC Hydro made us think in a different way,” says Rick Walker, who oversees energy management for the school district. “We were able to ask all of the ‘what if’ questions: what if we turn the building this way, what if we add triple glazing, what if we go to three storeys instead of two.”

The energy-modelling study allowed the Abby Senior design team to compare various lighting, heating and cooling systems as well as windows, roofing, wall and other products. It even looked at how the building is situated on the site, to determine the most energy-efficient design.

The result is a building that’s very different from its original concept. Instead of being designed in a more standard V shape and situated to directly face the front of the property, the final design turned the building slightly to situate it east-west to capture the most light and heat.

What had been strictly a two-storey building also added a three-storey, cast-in-place concrete, steel, glass and wood rotunda. Off the main floor of the rotunda radiate a teaching kitchen, community library and an arts area, while other floors include classrooms and laboratories.

In addition to its position on the site, other energy-conservation measures include natural “stack effect” ventilation techniques within the rotunda, increased roof and wall insulation, a heat recovery ventilator, low-flow fixtures and both occupancy and daylight sensors as well as shading. But perhaps the most innovative energy conservation measure of all is an open loop ground source heat pump system that uses well water for all space/ventilation heating and cooling.

Combined building energy savings should reach 33% over a typical building

“Abby Senior sits right on top an aquifer that feeds into the Fraser River,” says Walker. “We drilled some test wells and found there was so much water, we could use the aquifer for our heating and cooling source year round, for both Abby Senior and Abby Middle.”

Most importantly, though, adds Mainman, “Every drop of water that we pump out of the ground and around the buildings is released back into the aquifer.”

By combining this range of energy-conservation measures, BC Hydro estimates that Abby Senior will save, year after year, over 258,300 kilowatt hours of electricity, which means it will use about 25% less energy than a similar building constructed without those measures.

Together with natural gas savings of about 58%, the overall combined building energy savings should reach 33%.