July 16, 2012 - The U.S. Environmental Protection Agency (EPA) has named Air King a 2012 Energy Star Partner of the Year – Product Manufacturer for its "outstanding contribution to reducing greenhouse gas emissions by manufacturing energy-efficient products and helping to educate consumers about those products". 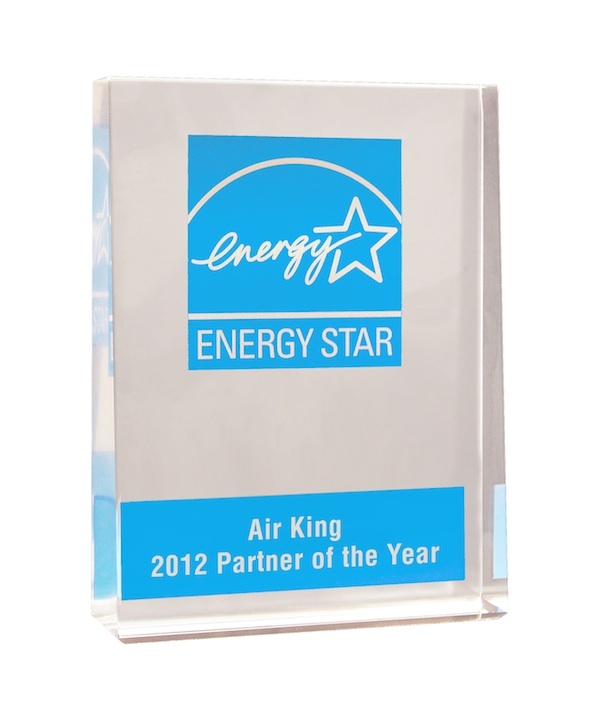 On March 15, 2012, Air King‘s accomplishments were recognized at an awards ceremony in Washington, D.C., which also marked the 20th anniversary of Energy Star. Winners were selected from approximately 20,000 organizations which participate in the Energy Star program.

“As we celebrate the 20th anniversary of the Energy Star program, EPA is proud to recognize Air King with the 2012 Energy Star Partner of the Year – Product Manufacturer Award,” said EPA administrator Lisa P. Jackson. “Air King and all of our Energy Star award winners truly demonstrate how the leadership and commitment from EPA’s partners has made a difference in the lives of Americans since 1992, saving them billions of dollars in energy costs and improving the health of our families, the planet and our future.”

According to the EPA, Air King, who has been an Energy Star partner since 2002, has “continued its leadership in energy efficient products by adding to its lines of Energy Star qualified exhaust fans and range hoods”. Some of these additions included the BFQF Snap-In installation exhaust fans, ADA-compliant range hoods and the UL555C Fire Rated series exhaust fans.