August 5, 2015 - “Some fridges are long, some fridges are tall, some fridges are wide, but, just like people, what’s important is what’s inside”, said Joe Berta with a smile, managing director at ARCA Canada, as the company celebrated the 500,000th Ontario appliance to be decommissioned at the Oakville facility since 2006. 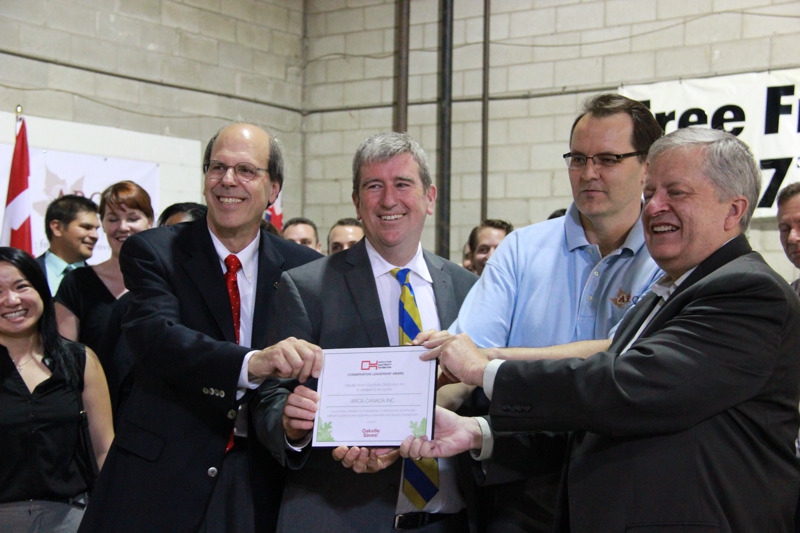 From left to right: Bruce Campbell

Glen Murray, the provincial minister of the Environment and Climate Change, and Oakville Mayor Rob Burton, joined in on the celebration on July 31, 2015, taking a tour of ARCA Canada to learn more about the recycling process. Murray even tried his hand at crushing an old fridge using the industrial baler and found out it’s harder than it looks.

ARCA Canada has provided appliance pickup and decommissioning services for the saveONenergy Fridge & Freezer Pickup, an electricity conservation program funded by the IESO. Of the appliances decommissioned at ARCA, 85% are refrigerators and/or freezers from the program and contain hazardous household waste, the company said.

Berta also credited the Local Distribution Companies (LDCs) for the success of the recycling program as they helped promote the program across Ontario.

ARCA removes plastics and aluminum, refrigerant, compressors and compressor oil from the appliances and bales the shells and remaining metals.

From left to right: Bruce Campbell