October 19, 2015 - The British Columbia Institute of Technology (BCIT)’s green team had a challenge. They have a small team, but said they wanted to inspire hundreds of staff in nearly 20 buildings across their Burnaby campus. 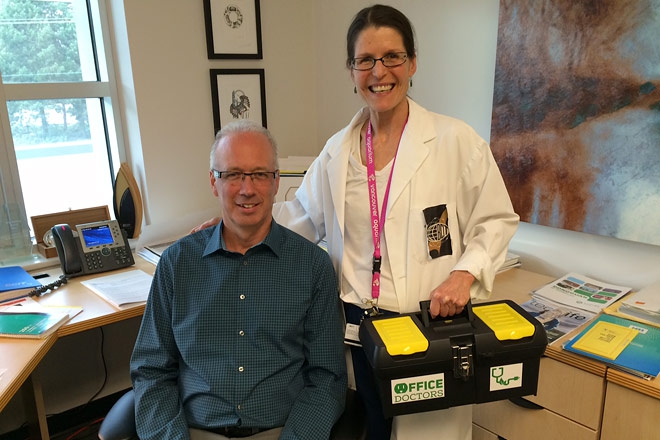 How did they do it? Through an Office Doctors campaign, they trained a group of 28 staff volunteers (“doctors”), who then took the message out to the larger staff community (“patients”) across BCIT. They connected with 154 people, and reported back that 86% agreed to change their power settings to cut energy use.

In its subsequent case study building, BCIT said it achieved 2.6% normalized electrical energy savings when compared to the previous year.

“Our previous campaigns were run by a small core group, but it’s hard to put everything on the shoulders of a few,” explained Alan Etkin, a BCIT senior analyst and founding member of their green team. “We knew we needed to get more people involved. So we had our core group working on strategy, then engaged volunteers to work one-on-one with staff.”

Doctor volunteers were provided with basic training in lighting assessments, power bar placement, computer settings and effective use of window blinds. With a “doctor’s kit” in hand (equipped with light meters, light bulbs and energy consumption meters) they conducted group and individual visits, including personalized assessments of work stations. At the end of each session they wrote out prescriptions containing energy-saving recommendations.

“The great thing was that patients were seen by their friends and colleagues,” continued Etkin. “It wasn’t someone anonymous, but a person who worked in the office they were in. The level of buy-in is a lot stronger when you know the person you’re talking to.”

“Having an office visit that is customized to your space is the most effective way to deliver the message,” said Chris Lum, BCIT energy specialist. “It’s more effective to do it one-on-one because you’re able to answer questions—it’s more personal.”

“It’s not often you’re able to spend half an hour with another person to talk about how to save energy and improve the comfort of your space,” added Alexandre Hebert, BCIT’s energy and sustainability manager. “The feedback was great. Doctors and patients both enjoyed the process and found things they hadn’t thought of, like learning what the optimal light level is for working at a desk, and using the light metre to see if they were under-lit or over-lit.”

After each visit, patients received small gifts of plants along with their prescriptions, and were encouraged to put photos on BCIT’s Intranet.

“We invited people to post the pictures on the website, which was really fun,” Etkin said. “Dozens of people posted pictures of themselves with their doctor, or holding their prescription. It really kept the general awareness going.”

It turned into a social engagement success story. By the end of the campaign, there were a whopping 7000 Intranet page views.

“The level of engagement was incredible,” Etkin concluded. “Of all the campaigns we’ve done, this one had the most reach. For us, the green team is about having fun. It’s way more motivating if you make something playful.”