February 22, 2016 - Catalyst Paper says it has a long history of reducing costs and improving energy efficiency. And at its Crofton mill near Duncan on Vancouver Island, Catalyst’s second biggest expense is energy. 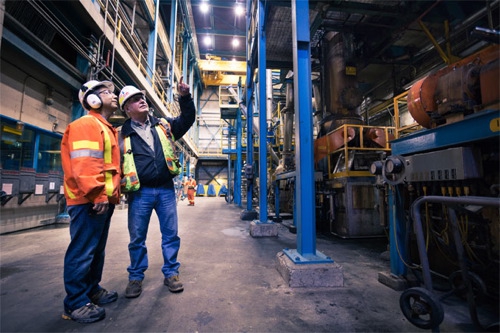 In December 2011, the Crofton paper mill joined BC Hydro’s Strategic Energy Management (SEM) Program, which financially supports the position of Edinson Mahecha, the mill’s energy manager. And from 2012 to 2015, the mill states it has achieved a 5.6% reduction in purchased electricity by consuming less while generating more.

Those savings were achieved by a combination of:

• Strategic Energy Management, which enables organizations to staff and deliver a strategic approach to managing energy,
• ISO 50001, which takes energy management to the next level with an external validation process, a focus on operations and controls, and the requirement to understand and document all energy management systems.

“The ISO standard doesn’t save energy—it’s just one way of having a robust energy management system that drives energy savings,” says Mahecha. “Creating the system is hard work—but it’s rewarding because it’s an investment for our future.”

Many organizations have made great strides in reducing energy consumption, but they are now asking themselves whether their project-based approach to energy savings will reach their goals.

Here are some of the key ISO 50001 benefits for Catalyst Crofton, according to the company:

• Cushioning the effect of an electricity rate increase: The mill was looking at a rate increase of 27% over five years, so long-term viability involved steady and lasting reductions in energy intensity.
• Improved performance: ISO standards have been criticized as paperwork exercises with a weak connection to business results. However, from its launch in 2011, the ISO 50001 standard has focused on performance improvement, which is vital to the mill’s success.
• Availability of a respected energy manager: Mahecha is a persistent, visionary and credible energy manager. He was a respected engineer at Catalyst’s Crofton mill before taking on the energy manager position, and he brought to the mill his experience in implementing ISO standards in previous positions.
• Existing ISO processes: The company had received certification under ISO 9001 (quality assurance) and ISO 14001 (environmental management) standards. This helped the company move more quickly to ISO 50001.
• BC Hydro funding: The funded Energy Manager position was instrumental in the implementation of ISO 50001. BC Hydro also funded energy management consultants to coach the mill through the transition.
• NRCan funding: The mill was able to use financial support from Natural Resources Canada for some staffing needs to achieve ISO 50001 certification.

All of these factors made ISO 50001 attractive, but Mahecha had to work hard for 18 months, first to sell his vision to managers and staff across the mill, and then to implement the standard. He was supported by Rob Belanger, the new mill manager, who was committed to a long-term future for the mill as it emerged from bankruptcy.

Other senior managers also needed to buy into the idea across their departments. Mahecha made monthly presentations to the senior management team (SMT) where he drew parallels between energy management and the mill’s existing systems for safety, production and quality. Managers also understood that previous energy managers had seen their support fade because their projects did not align with core business needs.

Mahecha says he spent most of 2013, including many weekends and evenings, planning for implementation of the standard. This was all on top of other energy savings activities, including his commitments to the BC Hydro SEM Program.

Crofton decided to move forward with ISO 50001 across all the mill’s operations. The mill already had solid management practices in safety, environment and quality. Mahecha’s motto throughout the project was, “Use the strengths the company has in management systems to organize and save energy.”

Mahecha developed a detailed business case, along with the Crofton SMT, to ensure that ISO 50001-conformance would provide value to the mill. The key drivers of the business case were:

• Increase in electricity rate of 27% in five years, with energy being the mill’s second biggest expense;
• Global competition in the pulp and paper market;
• Decreased global demand for many types of paper.

Given these drivers, Mahecha reviewed the benefits (including reduced cost, risk, and environmental impact) against the costs (including consulting, training, documentation, new IT systems).

The business case showed that cost reductions, plus the resources from BC Hydro and NRCan, offered:

• Potential energy reduction of 3% in the next three years,
• BC Hydro funding, including 75% funding of Mahecha’s position, gap analysis and a mock audit (by EnerNOC), and ISO coaching covering 60% of ISO elements (by EnerNOC);
• NRCan funding, including onsite ISO training, and support for Certification Stage 1;
• Resources from the Catalyst Mill, including 25% of Mahecha’s salary (independent of the ISO project), temporary staff for help with documentation and SharePoint support, and support for Certification Stage 2.

Mahecha gets his staff on board by talking about cost savings

At the start of the project, the company notes many employees and managers at the mill thought ISO was expensive, documentation-heavy, and conformance-oriented. Or they had no interest in the whole concept of standards.

But they did care about cost reductions that would help keep the mill in business. Mahecha made sure that all his conversations started with that point, and then led to an energy management system as a tool to find more savings and lock them in. He translated the language of the standard into practical terms for mill operators and managers.

• General awareness. Mandatory training is tracked for all employees.
• Procurement. For staff who are responsible for purchasing energy-using equipment.
• Induction. The mill induction software includes a section on energy management that all visitors must read.
• Contractors. If their work affects energy-consuming equipment, contractors receive additional training.

“We couldn’t have done ISO 50001 if we didn’t have the other standards in place,” says Mahecha.

His first step in planning was to consult with the ISO 9001 and ISO 14001 representatives on site. He learned from the challenges that those standards face:

• Implementation requires strong leaders,
• Manuals are extensive but not really used,
• People perceive the standards as pure paperwork with a focus on conformance.

To avoid these problems, the 50001 project planning focused on the benefits and results, not the standard itself. It was positioned as just one of many tools to achieve energy goals, and Mahecha says he took pains to make 50001 more appealing than other standards: for example, he made the internal SharePoint site much more enticing.

In particular, ISO 14001 is a big help because 50001 and 14001 are closely aligned: many of the roles and responsibilities are already clearly defined. And across the existing 9001 and 14001 standards, processes were already in place for 16 of the 26 required 50001 elements (for example, control of records, general management review, and internal audit of the management system).

The steps to certification

Four months into the project, in January 2014, Crofton conducted a mock audit with EnerNOC’s certified ISO auditor to see how the mill was progressing towards meeting the requirements. The auditor evaluated the mill’s compliance to the each of the 26 elements. The report showed Crofton management that getting certification would be easier and $20,000 cheaper than expected.

Mahecha, along with the standards leaders for 9001 and 14001, conducted a four-step process to integrate the implementations at Crofton:

A 5.6% reduction in energy use, and an increase in production

Generation increased from 60% to 95% of rated capacity. Moreover, Crofton notes it is seeing consistent energy utilization improvement every year.

“Now we can prove the results we have using 2012 as a baseline,” says Mahecha. The ISO process also means all energy—from electricity to natural gas, gasoline to biomass—is considered and managed together.

These results had to come without significant investment in capital, because Catalyst was very capital-constrained. The vast majority of savings came from operational improvements and the increasing strength of the energy management system.

Staff now seeks energy savings, and talks about it

By consistently measuring energy performance, Crofton says its staff has changed its attitude toward energy management:

• Crofton staff members now see – and actively seek – energy saving opportunities all around the mill. The SMT tracks the number of energy-related opportunities for investment in their monthly energy meeting.
• Conversations about energy used to focus on the trade-offs between energy and production. After ISO implementation, these win-loss discussions have been replaced by productive collaborations based on two agreed-upon factors: reducing energy intensity, and understanding energy drivers so that the team can rank projects more effectively.
• Operators now have clearer objectives. In the Thermo-Mechanical Pulp (TMP) operations room, the team understands that their objective is to make as much pulp as they can with as little energy as possible. At the same time, mill operation staffing has been reduced by over 50% in the past five years. There has been a flood of innovation in rising to this challenge, such as removing unnecessary screens and cleaners.

Before the energy management system was in place, staff would waste time by re-inventing the wheel on every project, which was frustrating for all concerned. Completing the system required an intensive effort in redefining processes, developing tools for those processes, and training mill staff. But now, with the system entrenched, many tasks are simpler.

Other benefits of ISO Certification

On top of cost savings from better energy management, other benefits came from ISO certification:

• Drive to improve performance to meet audits. The annual surveillance audit introduces a level of rigour that forces the mill to make sure that it delivers on commitments.
• Community interest in mill impact. The local community is very interested in the mill’s environmental impact, as is true for many industrial facilities. Certification shows the community that Catalyst Crofton is attaining global standards of resource conservation.
• Reward for the hard work of building the energy management system. ISO is a known brand that provides internal credibility for all of the work that goes into getting to ISO-conformance.
• Market branding. Catalyst’s two-decades-old corporate and environmental record is enhanced.”
• Customer retention. Catalyst’s customers are familiar with the impact of rising energy costs on the Crofton mill, so they’re concerned about long-term pricing. With ISO 50001, Catalyst is able to reassure them that the company is committed to finding savings through energy management.
• Partnership with BC Hydro. By becoming certified, the mill has shown BC Hydro that it’s a long-term partner for energy management.

Mill manager Rob Belanger says he would do nothing differently if he had to go through ISO certification again. Looking to the future, he says he constantly challenges Mahecha, his manager Borrett, and the SMT to make sure all energy management efforts deliver sustaining value to the mill.

Catalyst Paper Director of Energy Carlo Dal Monte recommends that executives at other organizations consider three factors when making a decision about ISO 50001:

1.    Understand why you want to do it. Catalyst had specific needs that this project met – other firms should be equally clear about the expected results and costs.
2.    Make sure you have a champion who is respected and is passionate about pursuing ISO. If people in the organization are going to take this seriously, then executives need to show that ISO is important enough to assign a real contributor.
3.    Understand the role of ISO 50001 in your global marketplace. For energy-intensive industries such as pulp and paper, this is a mechanism for holding organizations accountable for their energy performance. ISO 50001 is different from other standards in that it has continuous improvement built into it.