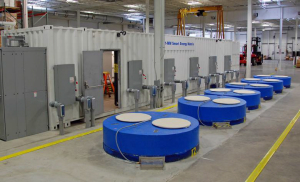 Storage is one of the most critical problems in the deployment of alternative energy generation solutions. Wind, for instance, is an excellent source of power, but it is generated most effectively when there is the least need for it. Beacon Power Corporation's new flywheel matrix may offer one solution for this challenge.

Beacon, a U.S. company that designs and develops advanced products and services to support more stable, reliable and efficient electricity grid operation, announced that it has built and tested an integrated matrix of ten high-power flywheels that operated together to absorb and supply a full megawatt of electricity. The system, located in Beacon’s Tyngsboro Mass. headquarters, will be the first of up to five megawatts of flywheel-based regulation capability that will be produced this year and commercially deployed to generate revenues from the provision of regulation services.

Until now, Beacon had been building and running individual flywheels in preparation for its first full megawatt implementation. Based on internal testing of an integrated matrix of ten flywheels, the Company has now shown that its one-megawatt Smart Energy Matrix can ramp up and down to absorb and supply a full megawatt of power.

Over the next few weeks, Beacon will begin system testing in conjunction with ISO New England, during which time the flywheel matrix will respond to actual ISO test signals to absorb and supply power. This plan will allow the Company to meet its schedule to interconnect live to the grid and to begin performing frequency regulation services under an ISO New England Alternative Technologies Pilot Program scheduled to start on November 18th. That program, which was unanimously approved by ISO New England and its members, received formal approval from the Federal Energy Regulatory Commission on September 15, 2008.

"This is another significant achievement in our company’s history and for the electric power industry," said Bill Capp, Beacon Power president and CEO. "We’ve proven that a matrix of our Smart Energy 25 flywheels, together with associated electronics, software and other components, can store and release a megawatt of electricity. In recent weeks our flywheel production rates have ramped up with continued good results. Based on this progress, we’re looking forward to responding to live ISO signals in the near future."

The ISO New England Alternative Technologies Pilot Program, which was announced last month, will provide revenue for regulation services until permanent market rules have been developed. This process is expected to take approximately 18 months.