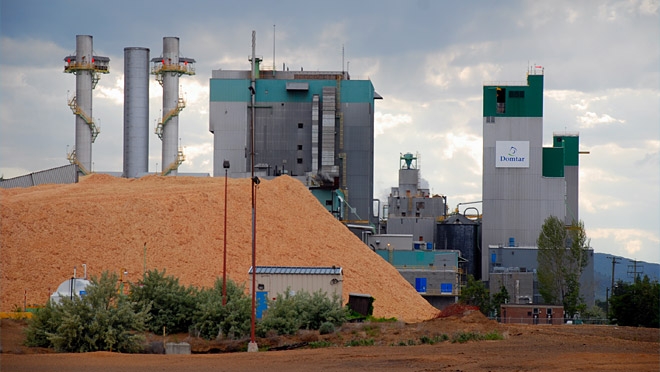 “We buy chips from 15 sawmills and wood processing operations in the region,” said Bill Adams, manager of engineering and strategic planning. “And it all has to travel through the mill from the chip yard up to the digester, which is where the chips get cooked to produce the pulp.”

Early in the 1970s, a chip blower system with a 1500 HP blower was installed to transport chips through the mill. But as Domtar increased its commitment to energy conservation over the years, upgrading boilers and improving thermal efficiency, it became clear the blower system needed to be addressed.

The team at Domtar has made significant strides in energy efficiency and environmental performance, investing $120 million since 2011. One of the biggest investments they selected was to replace the 40-year old blower with a new state-of-the-art conveyor.

The new system took 18 months to design and install, rising 120 feet in the air from foundations sunk 20 ft underground, and carrying chips 1500 ft. Adams said the capital cost—including structural supports, walkways, and the enclosure to keep the weather out—was more expensive than what a blower system costs. But with just two 75 horsepower variable-speed motors to power the entire system, the energy savings began immediately after the system was commissioned in November 2013.

“We received investment from the Power Smart program to do an energy study before we started the project, and it showed that a pneumatic system (old system) requires 16 times the power of a conventional belt carrying system (new system). So on that one component, we’re 16 times more efficient than we used to be,” said Adams.

The plant reduced its overall electricity demand by more than 2%, and is now saving 7.9 GWh of electricity per year—enough to power 719 homes. That adds up to savings of more than $350,000 per year on electricity alone. But that’s only part of the story.

“It puts the system in a more steady state operation, right from the very beginning of your cooking system. And with more uniform cooking conditions and a larger average fibre length, you have an opportunity to improve your pulp quality.”

It’s estimated the system saves over $1 million per year on chip costs through improved digester yield. It also cuts annual maintenance costs by $126,000 compared to the pneumatic system, which required regular replacements for worn piping and blower rebuilding.

Finally, the new system operates at a faster rate than the old one, allowing the mill to expand production and avoid what had become a seasonal production constraint.

Incentives and support made the difference
Adams credits BC Hydro as a partner in the project’s success, saying the Power Smart incentive of $2.3 million was key for the project to move forward. Adams noted the Kamloops mill competes against 13 other Domtar sites for capital investment, making the BC Hydro incentive extremely important in gaining project approval.

“We were probably one of the last remaining mills in Western Canada that was still blowing their chips to the digester,” said Adams. “The Power Smart incentive helped us get the new conveyor, which is lowering our fibre costs, lowering our energy and maintenance costs, and improving our pulp quality.”

“As an investment, it was transformative,” he added.