February 23, 2016 - Construction Voyer celebrated the completion of six Net Zero Energy condos in Laval’s Duvernay East community in Quebec today. The condos, which the company says represent Canada’s first Net Zero Energy "sixplex", were built as part of a national project that will almost double the amount of Net Zero Energy homes in the country. 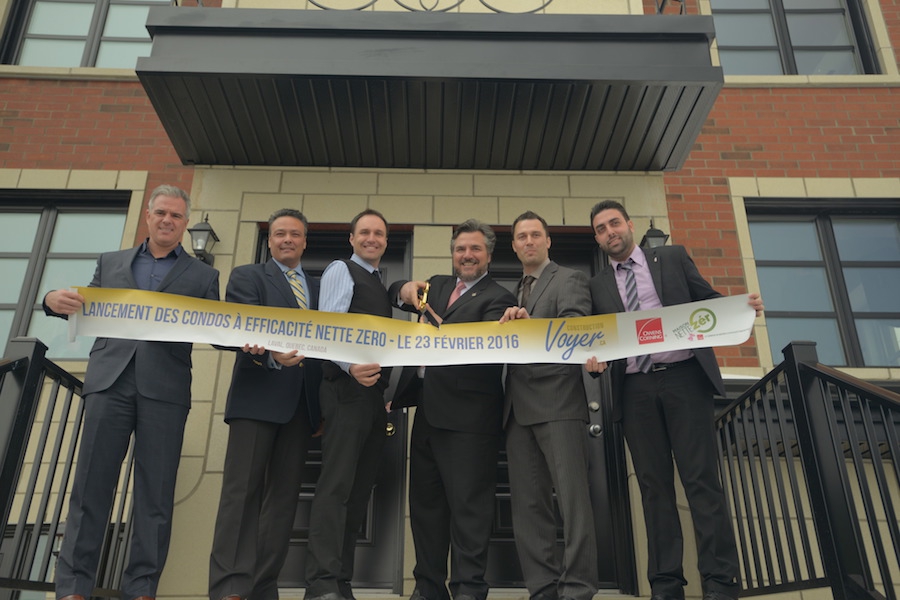 From left to right: Martin Cormier

Energy-efficient features of the multiplex include Owens Corning’s CodeBord air barrier system, advanced heating and cooling technology, LED lighting, triple-pane windows and an energy monitoring system to track energy consumption in real time, according to Construction Voyer. Also, the company adds that 146 rooftop solar photovoltaic panels generate the energy required for the six condos. Measured over a year, a Net Zero Energy home produces as much energy as it consumes.

The project, funded in part by Natural Resources Canada’s ecoENERGY Innovation Initiative (ecoEII), aims to prove Net Zero Energy homes can be built cost-effectively on a community-scale, Construction Voyer explains, as opposed to one-off custom builds. This project was also made possible by over $4 million in funding and in-kind contributions from Owens Corning Canada and the building industry.

“Innovation has always been an important part of our ability to deliver the best homes to our customers,” says Jean-Francois Voyer, co-owner of Construction Voyer. “Today we celebrate the completion of this important milestone and what we’ve learned from this project will allow us to continue to build homes that will benefit the environment and offer homeowners increased comfort and lower heating and cooling bills.”

“Together we are proving that it is possible to raise the bar when it comes to building energy-efficient homes that are affordable to the average consumer,” adds Salvatore Ciarlo, technical services manager with Owens Corning Canada. “We want to thank our project partners and congratulate Construction Voyer, who has been a willing participant in this initiative since day one.”