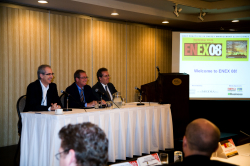 Energy efficiency is a term that is thrown around so much these days, one would think that every business was fully engaged in making it a reality in their facilities. But judging from statements by some attendees at Energy Excellence 2008 (ENEX08), and the presentations of a number of consultants at the same conference, there is a lot more talk than action on the issue.

ENEX08 was hosted by CLB Media (publisher of Energy Management and Green Business) and its project partners the Excellence in Manufacturing Consortium to offer commercial and industrial facility managers, maintenance managers and engineers a two-day event in which to learn more about how best to manage their energy use. The event was held at Stage West in Mississauga, Ont., on September 23rd and 24th and featured 17 speakers dealing with such issues as incentive programs, new technologies, maintenance and energy management best practices, and carbon management. About 100 attendees benefited from hands-on and interactive sessions, as well as a trade show that featured the newest in energy management technologies and management services.

The buy-in problem
What became abundantly clear from the comments of some attendees was that not all of them were getting buy-in from senior management, and some were being left to deal with the issue in isolation. Others had some of the tools, but the commitment wasn’t consistently managed.

Their stories didn’t sound too unique to some of the speakers.

“I have been in the energy management business for 22 years and, the truth is, we really haven’t made much headway at all,” said David Arkell, president of 360 Energy, and Ontario-based consultancy. “Energy efficiency tends to be the flavour of the month, or the year. To change this attitude, we have to do things differently.”

Remarkably, fully 33 per cent of energy used in the U.S. is expended in industrial facilities, and a further 18 per cent in commercial buildings. Energy is often a huge cost centre for any business, and yet rarely do businesses even have the most rudimentary understanding of their usage patterns. If they understood usage better, the potential savings — for a minimum outlay of time and money — is remarkable.

Dr. Howard Penrose, president of Success by Design, said it perhaps more bluntly than anyone at the event when he noted that “if you implement a good solid maintenance program, you’ll reduce your energy costs by in excess of 14 per cent.” If that doesn’t strike a chord with senior management, he noted that a team of four people at General Motors was able to reduce the company’s greenhouse gas (GHG) emissions by 26 per cent in a year through the use of effective energy management programs.

Penrose has worked extensively with GM, and he noted that, in one case, after having a free assessment done by the U.S. Department of Energy on some of their steam systems, the company was able to realize $750,000 in immediate savings by making a handful of adjustments.

The important point here is that energy efficiency management shouldn’t be seen strictly as a capital cost centre. It isn’t only about retrofitting buildings and making big changes (although such programs give you the bang for your buck you will eventually need to become an efficiency powerhouse) — it’s about managing what you already have effectively and efficiently.

Where to start
The key place to begin, according to Peter Rowles, vice-president of energy efficiency at Energy Advantage, is to make a plan.

“In the industrial sector, and even in the commercial sector, we see a lot of effort in doing energy audits,” he notes. “What we found is that a lot of those energy audits go nowhere because there is no plan in place before the audits are started. You need a plan.

“Some of this lack of planning is symptomatic of a lack of commitment at the senior level,” he continues. “I usually equate commitment to dollars. That’s a true test of commitment.”

“We believe energy management has to be integrated into the whole organization,” he explains. “It has to fit into the strategic direction of the organization. From our experience, if you rely on one person or one department, you will fail. You might be successful for six months or a year, but pretty soon that person gets tired of hitting their head against a wall because no one is listening and no one cares about energy That has to change. We do work across the country with organizations where 30 per cent of costs are energy, and not one person knows the cost of energy annually. How can that happen? Everyone here can play a role in energy management.”

The education challenge
The problem, as Arkell sees it, is that senior management aren’t keeping themselves educated.

“The next thing senior management says is, the only way to fix this challenge is spending money and capital,” he continues. “That’s not correct. The third thing we find with senior executives is that they say, ‘well, I’ll just pass the cost along to my customers.’ Well, those days are going to end, because you’ve got competition from other parts of the world that don’t and won’t deal that way. So, we’ve got to get at senior management. Historically, on the energy side, it has been technical people dealing with the issue, but we need to move it around.”

Fundamentally, Arkell sees this as an education problem. Everyone needs to be better educated on energy – from the boiler room to the C-suite and everywhere in between. There also has to be accountability at every level for energy use. And those who are managing energy programs need ongoing support and focus so they can get the job done. They need to be mentored in how to fix problems on an ongoing basis.

“I don’t know how many people aren’t aware of utility programs that are out there,” says Arkell. “If you knew about them, you’d take advantage of them. If you knew what suppliers could help you, that could be effective as well.”

The last thing Arkell stressed was that you have to measure and verify your results.

“That is never done in energy,” he says. “So many people don’t measure, and you’ve got to measure it, verify it, make sure it’s right, and then brag about all the great things that you’re doing.”

It’s also important to track cost avoidance – all the things you didn’t spend money on because of the effectiveness of your program. It’s the measurement, the verification, the cost avoidance and the bragging that create more converts within the business.

Quick wins
And as mentioned above, there are quick wins available. Rowles put energy savings opportunities at industrial facilities in Ontario at anywhere between 15-30 per cent of total energy spend. Arkell suggests that five per cent savings is easy, “with just a little focus,” even in the first year.

Yves Lemoine, vice-president of energy management services and business development at Toronto Hydro Energy Services suggests the best way to start is just by walking through your facility. “Try to focus on where your wastage is,” he says. “Come back to your facility when it’s supposed to be shut down for a start. Then, if you can see it or hear it, it’s wasting energy. Those are usually the two simplest things. In one experience I had, at an aluminum packaging company, we came back on a Sunday morning, walked through the plant and just followed the sounds. We found fans that were running, compressors that were running. People had gone through the shut down procedures but hadn’t totally implemented them. When we walked out of there, we had taken 300 kilowatts off their demand.”

Lemoine stresses that, no matter how limited your pool of information initially, don’t allow this to be a barrier.

“Pull people together in your facility,” he says. “They have a lot of knowledge, a lot of experience. Engage them, ask them questions. Most people do what they do because they learned it that way or they’ve never been listened to, and you can draw experience from them. You’ll be surprised by what people will say if approached the right way. For me, it’s all about engagement.”

The challenge for energy managers is to, first, make sure the commitment to energy efficiency exists at the top level of their organization and then engage those within the organization that can help make that happen at every level. Everyone has to understand their impact on energy use.

“Energy awareness is great, but you have to target it at what the employees will react to, says Rowles. “You have to look at where the individual works and consider what are the things within his environment that he has control over. What is he responsible for turning on and off? And then build that into the training for that job position. Make it relevant to their working environment. Everybody has got to be involved, and energy has to be broken into performance evaluations. Incentive programs and recognition can also help.”

In his keynote address on the first day of ENEX08, Ontario’s Chief Conservation Officer, Peter Love, called on industry to find conservation champions within their organizations to push the conservation agenda forward. It’s a laudable idea. Those in charge of managing energy within a facility are ideal for the task, but they need to push for commitment across the organization if they hope to see the initiative blossom and sustain itself.