April 15, 2015 - The recent update to the B.C. Building Code included a variety of changes aimed at improving the comfort and efficiency of new homes in the province. And it's also causing a bit of apprehension. 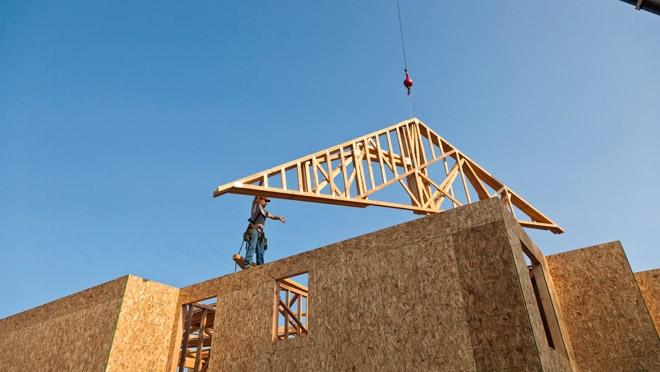 “There’s always fear of the unknown; there’s fear of change,” says Richard Kadulski, an architect and member of the committee that wrote the new Code. “The construction industry is slow to change, and as of now there are a lot of changes being pushed fairly fast. The changes are going to require some thought, but I think once most builders figure out what works for them, it’s not a big deal.”

So where do you start? Kadulski suggests focusing on the single biggest change in the way the Code is structured: wall assemblies.

Assess the effective R-value of your current wall assemblies: a CEA and online resources can help

The Code now requires that builders calculate the “effective” R-value of wall assemblies. In the past, the Code required a “nominal” R-value. If the code required R-20, and if it was noted on the plans that the wall insulation was R-20, then it was deemed the wall had R-20 performance and complied with the code. But no more.

“Typical soft wood has an R-value of about 1.2/in. while a fibreglass batt is about 3.3/in.,” says Kadulski. He says in walls using standard framing practices 23% of the wall area is solid wood. “Only 77% of the wall is insulation, and the wood area of the wall is very low R-value — so effectively, the overall R-value of the entire wall is decreased.”

Every component within a wall assembly, from studs and insulation to rain screen, exterior cladding, interior drywall and even any layers of still air, must be added into the calculation of effective R-value. (The Code has specific tables that help with calculations. See 9.36.2.4 Table A — 9.36.2.4.(1)D.) Kadulski says it may sound like a monumental task, but it will be easier over time.

“Most builders use three or four typical assembly types, depending on the exterior finishes they use,” he says.
Kadulski suggests hiring a Certified Energy Advisor (CEA) for advice and as a shortcut to start working with the new Code.

“Even if they don’t need to deal with the CEA continuously,” he says, “they might buy a few hours of a CEA’s time to review typical details that they’re working with and come up with typical effective R-values for those assemblies. For homebuilders, the CEA is probably the best, quickest way to get help.”

Kadulski says builders will also need to revisit their detailing for elements such as windows and doors, where there are some specific new requirements — another area where a CEA may be able to help.

He recommends a set of free guides from the Homeowners’ Protection Office, called Illustrated Guide: Energy Efficiency Requirements for Houses in B.C. There’s a guide for each climate zone.

Depending on the climate zone, builders may be able to meet the new Code standards by reducing framing and using higher R-value insulation. However, Kadulski says the easier path will eventually be to adopt newer, more efficient building practices.

Continuous insulation is one option, where a layer of insulation is wrapped around the exterior of the house, unbroken by framing or other assembly components. “It gives really good value,” says Kadulski. “It’s superior, because it stops thermal bridging.”

As an example, he says a 2×4 wall with an R-14 batt and two inches of exterior insulation would probably give a better effective R-value overall than a 2×6 wall with R-20 batt insulation only.

To appreciate how continuous insulation can make a difference, Kadulski  recommends renting an infrared camera and touring neighbourhoods in the cool early morning to take note of the ways in which heat leaks out of houses.

“It’s absolutely worth it for somebody who wants to investigate,” he says. “Whether you go back to an old project or just take some photographs in your neighbourhood, it’s amazing what you see on the infrared camera.”

Insulated concrete forms (ICFs) are another technology Kadulski expects will grow in popularity because they offer superior R-values compared to traditional assemblies. Effectively a polystyrene-foam form into which concrete is poured, he says ICFs are excellent for basement walls, and are now being used for above-ground walls in mid- and high-rises in Ontario.

“There’s a bit of a learning curve initially making sure that the forms are set properly and braced correctly,” he says. “But once a builder works that out, it’s easy because it’s insulation and it’s forming. Everything is done all in one shot. They work quite well.”

Kadulski says grappling with the new requirements for efficient walls may be a challenge for some builders at first, but the industry has proven in the past that it can master significant change, and thrive.

“Initially a rain screen was considered to be outrageous and expensive, and it quickly settled out. Yes, it meant some extra, but it’s not as bad as everybody feared. The same thing’s going to happen with the new Code changes.”