March 10, 2016 - Energy efficiency projects are nothing new to North York General Hospital (NYGH), which has provided care for patients and their families in north Toronto since 1968. 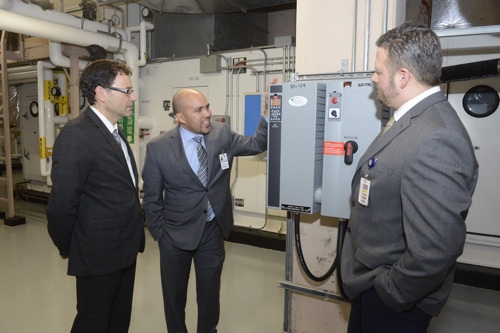 The hospital says it has been actively retrofitting its entire facility over the last eight years. After tackling projects like lighting retrofits, air compressor audit and chiller recommission to upgrade the hospital, Graham Crouse, manager of building services at NYGH, says he knew there was an opportunity to better control the building’s ventilation system. Instead of operating a constant air volume (CAV) system, Crouse took a closer look at the space being controlled and wanted a way to use unoccupied periods and night-time set-backs in their operating rooms.

Toronto Hydro provided NYGH with the services of a Roving Energy Manager (REM) to help them identify and prioritize projects. The REM is dedicated to monitoring the hospital’s current electricity consumption trends, identifying energy use by equipment and then prioritizing savings opportunities. An energy audit prompted NYGH to take a closer look at the building and see which projects they should pursue. The audit identified how all their systems performed, and where energy savings could be found.

Toronto Hydro worked closely with NYGH to move forward with a project that included installing Variable Frequency Drives (VFDs) on three major Air Handling Units, along with room occupancy sensors. Modifications were made to the operating schedule (night setback and room occupancy-control), and the hospital replaced pneumatic damper controls and actuators with digital controls and electric actuators. Automated Logic Inc. was the contractor who performed the work.

According to NYGH, the project’s business case, including the total project cost, estimated payback period, annual targeted savings, along with the added incentives from Toronto Hydro, was easily approved by the hospital’s senior management.

“If you build [the incentive] in, the payback time is substantially shorter, which to most senior teams, and especially the CFO, is the key to making the decision,” explains Andrew Blair, director of building services & capital planning at NYGH.

According to Blair, “The key for NYGH was getting a REM, because once we had somebody who we scheduled meetings with and who sat down to look at what we’re doing, it made it easier not to miss the opportunities.”

“Hospitals are a 24/7 operation; we consume a lot of electricity. If we can optimize that energy consumption, we’ve done our part for our community,” Blair adds.