July 18, 2013 - Envida Community Energy Inc.—an affiliate of Guelph Hydro Inc.—is working with the City of Guelph to develop district energy projects that aim to help the community achieve environmental targets set out in the Guelph Community Energy Initiative, while also serving as a catalyst for economic development. 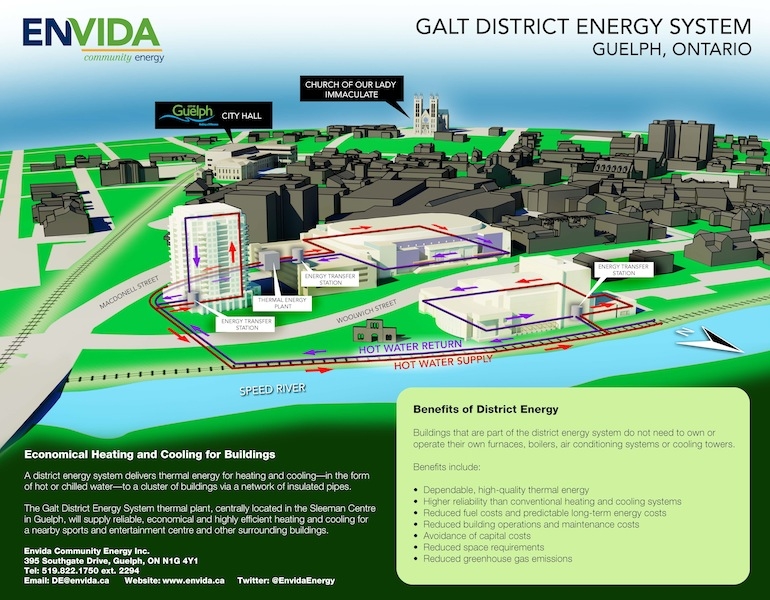 “District energy is such a simple, elegant way to meet some of the community’s energy needs while helping to reduce greenhouse gas emissions,” said Barry Chuddy, Guelph Hydro’s CEO.

District energy systems produce steam, hot or chilled water that is channelled through underground pipes into buildings where it is used for heating and air-conditioning. They are commonly used to heat and cool hospitals, universities, government buildings, convention centres, factories and industrial parks, as well as residential neighbourhoods, says Envida.

One proposed project is the Galt District Energy System (photo), which would be located in downtown Guelph. A thermal energy plant, located in the Sleeman Centre, would initially use natural gas to heat water in boilers and a central chilling plant to chill water. The hot and chilled water would be supplied via underground pipes to nearby buildings where it would be used to provide heating and cooling.

Another project under development is located in the 675-acre New Hanlon Creek Business Park that which, according to Envida, is expected to attract 10,000 new jobs by 2031. When this new business park was in the planning stages, city planners included easements for district energy piping. Envida Community Energy recently signed an agreement for a parcel of land located in the business park that would be used to house a district energy facility. Businesses looking to locate in the New Hanlon Creek Business Park would have the option of connecting to the district energy system for heating and cooling.

Buildings that are part of a district energy system do not need to own or operate their own furnaces, boilers, air conditioning systems or cooling towers. Other benefits include lower fuels costs, reduced space requirements, lower building and maintenance costs and reduced greenhouse gases, adds Envida.