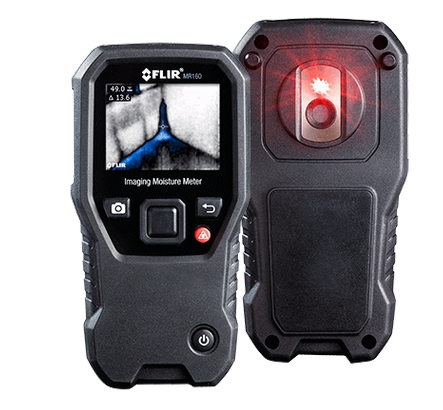 FLIR says the MR160 is the “first moisture meter to be equipped with a built-in thermal camera and features Infrared Guided Measurement (IGM) technology, driven by a FLIR Lepton thermal camera core”. With this capability, FLIR says it has developed the only moisture meter with the ability to pinpoint potential moisture issues, which are represented visually in the thermal image. The user then knows where to place the MR160 probes to best quantify moisture levels and problems.

Along with thermal imaging, the MR160 includes an internal pinless probe for non-destructive quantitative measurements as well as an external pin probe for contact readings that help confirm actual moisture levels. A built-in laser pointer and display cross-hairs are also featured.