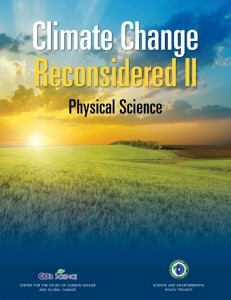 Co-authored/-edited by Dr. Craig Idso and professors Robert Carter and S. Fred Singer—who worked with a team of 44 other climate experts—“this document cites more than 1000 peer-reviewed scientific papers to show that the IPCC [United Nations’ Intergovernmental Panel on Climate Change] has ignored or misinterpreted much of the research that challenges the need for carbon dioxide controls”, explained Harris.

Carter, former head of the School of Earth Sciences at James Cook University in Australia, explained “NIPCC’s CCR-II report uses layman’s language to present solid evidence that today’s climate changes are well within the bounds of natural variability”. He went on to explains that “real-world observations tell us that the IPCC’s speculative computer models do not work, ice is not melting at an enhanced rate, sea level rise is not accelerating, the frequency and intensity of extreme weather events is not increasing, and dangerous global warming is not occurring”.

“There is a climate problem,” Carter admitted. “It is the natural climate-related events that exact very real human and environmental costs. Therefore, we must prepare for—and adapt to—all climate hazards when they happen. Spending billions of dollars on CO2 controls in a vain attempt to stop these events from occurring reduces the wealth of societies, and so our capacity to address these and other real-world problems.”

ICSC Energy Issues advisor, New Zealand-based consulting engineer Bryan Leyland, concluded: “Governments should welcome the NIPCC CCR-II report. It provides them with the scientific evidence they need to justify ending the expansion of ineffective alternative energy sources and other expensive and futile strategies to control climate. Then they can focus on supporting our most powerful energy sources—coal, oil, natural gas, nuclear and hydropower—in order to end the scourge of energy poverty that afflicts over one billion people across the world.”

Related
VIDEO: There are unknown unknowns… but not with energy management
Tags