A case study on energy optimization and savings at an industrial refrigeration plant.

When an industrial refrigeration plant is designed for manufacturing, the facility’s energy costs come a distant second to other specifications. If the product cools fast enough in production or stays frozen in the freezer on the hottest and most humid days in August, then a plant is considered well-designed.

But can the same result be achieved with a lower energy cost?

An industrial refrigeration plant is typically one of the largest electricity consumers at food manufacturing plants. It is also the most complex system, in that it can meet the same cooling load while working under different settings and operational procedures. Refrigeration uses electricity to run thermodynamic processes that involve air, water and refrigerant; balancing these processes to achieve the highest energy efficiency is far from trivial.

Since plants are designed to meet load for the hottest and most humid day, they have significant spare capacity most of the year. During colder periods it’s possible to run a refrigeration plant in very different mode and receive the same amount of cooling. In a way, operating an industrial refrigeration plant is not unlike driving a car: one can get from A to B using very different amounts of gasoline.

One of our clients—a food processing plant in Brampton, Ont.—runs 200hp and 100hp fixed-speed Frick compressors in an ammonia refrigeration system to support its production load, freezer and cooler.

During an energy audit we identified several opportunities to reduce energy consumption through a change of setpoints and operational procedures as well through the installation of variable frequency drives (VFDs) on condenser fans.

When the client saw the estimated effect of our suggested changes to their energy cost, the decision to go ahead came easily.

To ensure that no surprises would disrupt production processes at the plant, we performed all changes gradually and with the full support and awareness of the operational staff. At every step of the project the maintenance team knew what was happening, what to monitor, what to expect and how to reverse changes if things turned sour. 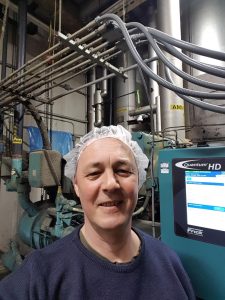 Within two months we implemented all previously identified measures and even found some more opportunities for savings. The list of implemented changes included change of setpoints, improved compressor sequencing, change of operational procedures and integration of VFDs for control of condenser fans. Prior to the optimization project itself the client installed VFDs on its evaporator fans based on our audit.

We estimated the mean value of annual savings at 400,000 kWh.

Why is this not an exact number? In projects where consumption depends on production level and weather, it is not possible to determine the exact savings that result from implemented changes. Day-to-day or week-to-week comparisons are not apples to apples. Resulting savings can only be estimated through various methods. The most reliable estimate can be achieved through application of the best practices in this area—International Performance Measurement and Verification Protocol, or IPMVP.

Since accuracy of the estimate was important, we followed recommendations of IPMVP. We directly measured electricity consumption by all components of the refrigeration plant before and after implementation for two weeks, created consumption baseline normalized to production and weather before and after, and compared forecasts produced by these two baselines.

This method resulted in an estimate of 700,000 kWh per year. Since a significant part of the savings is expected during colder months of the year, we have excluded savings through the June-September period and arrived at a number close to 400,000 kWh. I think this is an aggressively conservative estimate.

When we started work in February, the plant routinely ran two compressors during production. In July, two months after optimization was completed, the maintenance manager shared with us that with a similar production load they have just started using the second compressor. This means that until mid-June one compressor fully met their production load. In fact, on colder days in March they run production on the smaller compressor alone.

Savings equate to one week of plant operation

Reducing the energy consumption by 400,000 kWh saves this client about $50,000. This savings will go towards profit. To earn the same amount of profit this plant must sell, produce and ship about $1 million worth of product. This would take over a week of production. Effectively, as a result of this project, the plant could go on vacation between Christmas and New Years and still have the same profit.

Our optimization techniques are not common knowledge in the industry, therefore, we had to proceed in small steps to keep the operational staff comfortable with the plant’s ability to meet its cooling and freezing loads. Close cooperation with the client’s staff was crucial to the project’s progress and success. Regular communication, clear protocols and safety net procedures are all important elements for a complex project.

For the same reason we had to educate mechanical and electrical contractors about project steps and regularly monitor results of their work, both contractors gravitated towards traditional, less energy efficient operational procedures.

Optimization takes double the time expected when machines are not new. Continuous monitoring of consumption by all elements of a refrigeration plant makes the conversation about performance much easier: one measurement is worth a thousand opinions and forecasts.