July 4, 2016 - HyLite LED Lighting says its plug-in LED lamp for down lighting applications, the VL, delivers 116 lumens per watt with a 120-degree beam angle. At 12W, the VL replaces up to a 42W CFL, reducing energy consumption by up to 71%, according to HyLite. 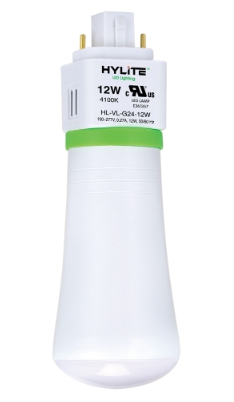 The lamp operates on 120-277V and does not require any ballast or additional equipment to operate, the company adds. It also does not emit any EMI or RFI interference, “making it an ideal energy-saving lighting product around sensitive equipment, and in applications such as hospitals or airports.”