September 7, 2016 - Paul Mertes does not consider the innovative system his company has crafted to be pure internet of things, but he does recognize that it is at least a philosophical match, and a sterling example of the potential power of IoT. 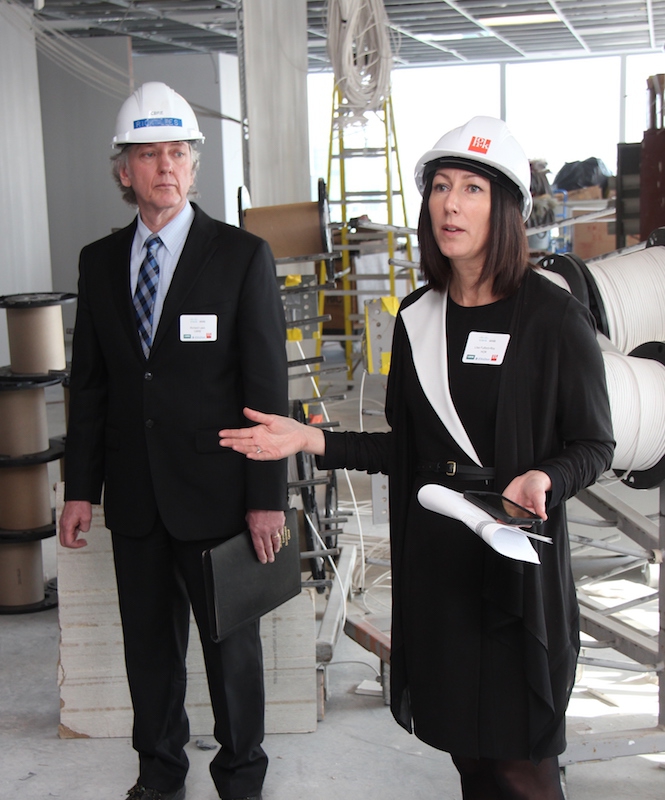 Richard Lees of CBRE and HOK’s Lisa Fulford-Roy explain the design and behind-the-walls infrastructure of Cisco Canada’s Toronto Innovation Centre during a “Hard Hat” tour back in February 2015. The facility at RBC Waterpark Place III was still under construction at the time. Photo A. Capkun.

Mertes is president and CEO of CircuitMeter, a company selected by Cisco as its submetering partner for its Toronto Innovation Centre—one of nine facilities around the world that have been created to showcase and energize digital innovation and development.

Following the techno-wide-net philosophy of IoT, the submeter will draw on myriad information portals to be able to tell clients where each fraction of energy entering their industrial, commercial and institutional buildings is going and, more importantly, if any is being wasted, and where.

The company has developed advanced electrical energy submetering systems and integrated big data, cloud-based software designed to analyze real-time, detailed energy usage. The system, in the marketing stages now, is designed for the double-whammy: it will allow energy users to better manage their energy consumption and should prove effective in reducing their costs.

Products include WebMeter, which lets clients capture data related to energy usage from every circuit in an electrical panel within the building. Its CircuitMonitoring product operates as a cloud-based energy management platform and dashboard, providing building operators with a circuit-by-circuit view of their electrical usage and trends, as well as notifications of trends and anomalies.

The combination of the two provides historical and real-time detailed analysis through the use of visual dashboards and reports. Facility managers have the ability to receive their energy information at an enterprise level, and at the individual circuit level within a facility.

Mertes notes the system’s value is underscored by a recent U.S. Department of Energy analysis that estimates buildings lose about 30% of incoming energy for a variety of reasons: a monetary value nationally of about $75 billion to $80 billion a year. “There’s no reason to think it’s any different in Canada,” he says.

There are a variety of possible sources for energy loss of such magnitude, Mertes says, ranging from equipment that is reaching the end of its shelf life to machines that were never installed properly at the outset. In many cases there are machines or systems that quietly carry on running after they were to be shut down at a particular time of year (e.g. heating systems in summer, and cooling systems in winter).

“There are mistakes,” he says.

The CircuitMeter submetering system, he says, is a “continuous energy audit” designed to identify those costly losses. “We will catch those inefficiencies right away.”

The submeter system is in the process of entering the marketplace now, so it will be some time before CircuitMeter has been able to accumulate operational statistics to demonstrate its success rate. But Mertes estimates the system will produce enough energy cost savings in the first few years to pay for the system’s installation and monitoring costs.

“We have faith in our forensic energy management,” he says.

The system is not designed for single-family homes, he notes, though it would certainly be applicable in apartment buildings and larger-scale condominium developments. In other words, any larger structure with a significant energy demand.

The Cisco Innovation Centre is intended to create a forum for industry collaborators such as CircuitMeter and other stakeholders to work on transformative innovation initiatives related to smart cities and buildings, healthcare and financial services.

“We view this designation as further validation that our advanced energy submetering technology and big data analytics will be a major factor in the future improvement of energy efficiency in industrial and commercial markets,” Mertes noted at the time of the February announcement.

While IoT-inspired designs can provide a near-limitless source of beneficial applications in fields ranging from health to education, more companies such as CircuitMeter are moving to products and services that will show immediate financial benefits to clients on the energy front.

A version of this article appears in the May/June 2016 edition of Connections+ magazine. The editor, Paul Barker can be reached at pbarker@annexweb.com .

PHOTO: Richard Lees of CBRE and HOK’s Lisa Fulford-Roy explain the design and behind-the-walls infrastructure of Cisco Canada’s Toronto Innovation Centre during a “Hard Hat” tour back in February 2015. The facility at RBC Waterpark Place III was still under construction at the time. Photo A. Capkun.