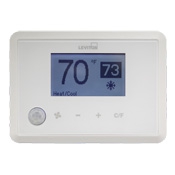 The device detects if a hospitality room is occupied and automatically adjusts heat and cool set points based on occupancy, as well as On/Off control of lights, televisions, lamps and more, says the company.

The Omnistat 3 can communicate with up to 10 devices, according to Leviton. Options include a light switch, door/window contact, hard-wired key card switch, motion detector, occupancy sensors, and marked controlled receptacles via heavy-duty load control modules.