March 27, 2019 - As part of an ongoing effort to conserve energy and advance toward becoming a ‘net zero carbon’ city, the municipal government of Mississauga, Ont., recently installed pool drain heat recovery (PDHR) systems at four of its indoor recreational facilities, including the Clarkson, Frank McKechnie, Malton and River Grove Pools. 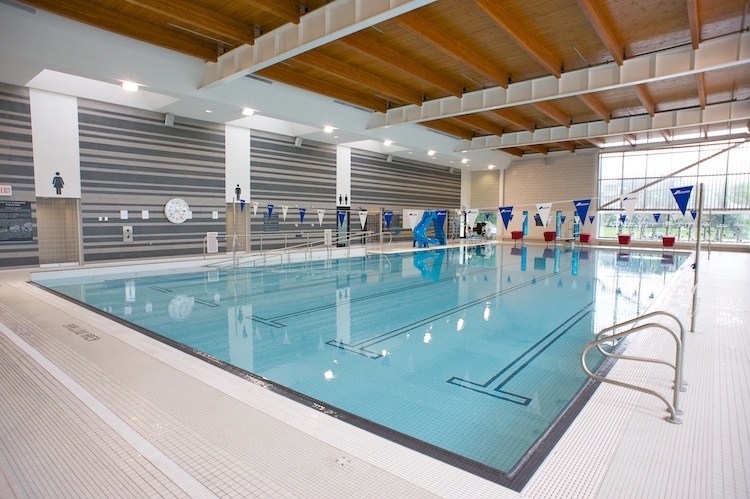 The systems recover approximately 80% of the heat from the pool water that is drained at the end of each day. This recovered heat is then used, in turn, to preheat the makeup water when the pool is filled again.

Not only does this technology save on bills for heating, but by automatically regulating and limiting the amount of water drained to the code requirement of 15 L per bather per day, rather than allowing the process to be handled manually, it also saves on bills for water, as less is wasted due to human error.

From lunch to launch
The notion for the project arose at one of the city’s lunch-and-learn sessions in early 2018.

“We are always looking for and investigating new technologies to save water and energy,” says Daniela Paraschiv, Mississauga’s manager of energy management, whose purview spans all utilities, including natural gas, water and electricity. “The business case for installing PDHR technology was very strong—so strong, in fact, that we selected the four sites to start with, rather than just one as a pilot project, as we were confident the systems would deliver.”

“We put out a tender that was picked up by two contractors,” explains Shalini Srivastava-Modi, energy management co-ordinator for the city and this project’s manager. “We had to run a competitive process, but that was a challenge because not many contractors can supply this type of niche technology. One of the two contenders, Solar Ontario, met our requirements.”

They hired the company in March to design, engineer, manufacture and install the system. The four installations were completed by the end of June.

“There were pre-installation meetings and some of the pools needed more plumbing for system connections,” says Srivastava-Modi, “but the PDHR installations themselves were very straightforward, taking one day each. We didn’t have to close the pools for the work.”

While the four facilities vary in terms of where their PDHR systems ‘sit,’ each had plenty of free space in its mechanical room to find the perfect spot and accommodate future servicing needs.

Simple but substantial
The systems work by using a heat exchanger. This extracts heat from the old water and transfers it to the new.

As mentioned, in addition to saving on heating, the system optimizes the draining process by automating it. Each evening, the pools’ operations staff—who were trained directly by Solar Ontario—simply punch in that day’s total number of bathers, which is recorded at the gate throughout the day. Then, the system uses that information to calculate how many litres of water need to be drained and replaced overnight and how long the process will take—generally anywhere from three to 12 hours.

“There’s really nothing else our rec centre staff has to do, other than clean the filter once a month,” says Srivastava-Modi.

The anticipated total yearly energy savings from all four systems is equivalent to the power required to run six houses for one year.

“We are saving approximately $1,000 per facility per year in gas for heating,” says Paraschiv. “We are saving on labour costs, too, as we don’t need someone standing there for the entire draining process anymore. And while it’s hard to quantify how much water we’re saving—since it is impossible to know how exactly much was drained in the past, when it wasn’t being measured—we do know it is substantial.”

Diving into the data
The project’s success is not the end of the story, either. The second step, which began early this year, is to integrate the PDHR systems with their corresponding building automation systems (BASs).

“We want to bring information from the PDHR systems into the BASs so we can monitor them remotely,” says Paraschiv. “This will be beneficial as we quantify performance. Being analysts ourselves, we want to build a database. The number of bathers, for example, impacts many other aspects of operating a pool.”

And afterwards, there may be the chance to take a similar approach to non-pool facilities, too.

“While this particular system is designed specifically for pools, there are many other applications for heat recovery in our other buildings,” Paraschiv says. “We will be exploring many further opportunities to save energy.”