May 27, 2014 - A new paint process revealed by Ford for its Transit vans not only promises a longer-lasting gloss, but should save the Kansas City Assembly Plant a ton off their electricity bill. 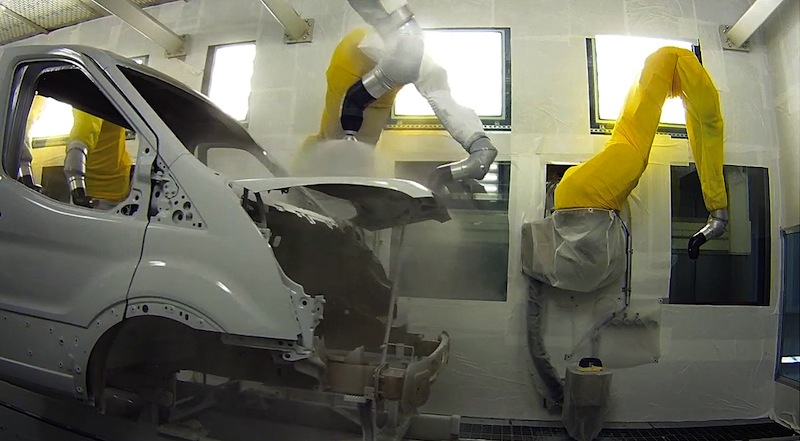 The Transit vehicles built in Kansas City are the first to use a new two-wet monocoat paint process developed by Ford and its paint suppliers. In addition to making paint tougher, the process reduces painting time and energy use by cutting the number of paint applications from three to two, and the number of drying procedures from two to one.

VIDEO and PHOTOS below.

The new paint process uses less energy and water, and reduces carbon dioxide and particulate emissions compared with conventional paint processes, says the automaker. The reduction in paint and energy consumed is expected to result in 9500 tons fewer carbon dioxide emissions and a 35-ton savings in particulate emissions on an annual basis. A dry scrubber system will help save more than 10.5 million gallons of water. Overall, the system should save 48,000 MWh electricity.

The new paint procedure is being used for white-coloured vehicles, which account for 80% of Ford Transit production at Kansas City Assembly Plant. As each colour must be developed uniquely for the two-wet monocoat process, other colours will be considered based on demand. (A conventional three-wet process remains in use for metallic-coloured vehicles.)

The two-wet monocoat system helps increase production efficiency, says Ford. The more streamlined process takes the vehicle body through an electrostatically bonded corrosion-resistance (E-coat) bath. The Transit body remains on a carrier that is lowered into the E-coat by four pendulums, rather than being manually removed from the carrier and attached to chains to be taken down, only to have to repeat the same steps before moving on to the paint booth.

The pendulums take the vehicle body into and out of the bath at steep angles, reducing the length of the bath by as much as 320 feet. Transit’s paint operation requires less space than that used in production of the smaller Ford Fiesta.

“The two-wet monocoat process allows us to design a system considerably smaller than a conventional paint shop, especially with regard to a vehicle of this size and complexity,” said Dennis Havlin, Ford global paint engineering development and launch supervisor. “Because painting time is cut down, the technology enables greater productivity using less equipment.”