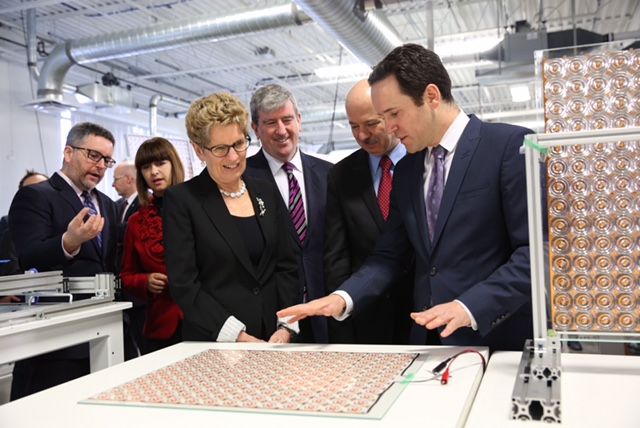 Premier Kathleen Wynne recently announced $74 million will go into a “cleantech innovation initiative,” that will encourage “large industrial plants to adopt leading-edge technologies”. For this program, the government said it is partnering with the Ontario Centres of Excellence. Additionally, Wynne said $25 million will be invested in a “Green Smart energy efficiency program to help small and medium-sized businesses reduce emissions and become more energy efficient”. Canadian Manufacturers & Exporters will be delivering this program, the premier added.

“Our government is taking action to stop climate change by helping our business sector create prosperity and jobs for today and tomorrow”, Wynne said. “Through these two new programs, we will help reduce greenhouse gas emissions, while promoting the innovative and disruptive technologies that will improve productivity and secure our economic future.”

Specific details of the Green Smart program, including eligibility requirements, are still being finalized, according to Belinda Bien, communications advisor for the Ontario Ministry of Research and Innovation. She added that the details for the cleantech innovation program (including the final name of the program) are being designed now as well, and stakeholder and partnering consultations are expected to occur in late spring/early summer 2016.

Related
VIDEO – You Cannot Manage what you do not Measure – Energy 2011
Funding opportunities abound with latest SDTC announcement
What is CO2e or “carbon dioxide equivalent”?
Honeywell to study possible upgrades at 22 Charlottetown facilities
Tags