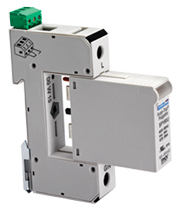 Ferraz Shawmut, a global leader in circuit protection, announces the introduction of its new Surge-Trap Pluggable Surge Protective Device (SPD). The Surge-Trap Pluggable SPD meets requirements for both UL 1449 Third Edition and IEC 61643 standards. Like its modular predecessor, the pluggable SPD features TPMOV technology and is a “no-fuse” SPD that doesn’t require the use of additional overcurrent protection. It also offers IP-20 grade “finger-safe” protection and mounts easily on a DIN-rail to safeguard critical electrical system components from the harmful effects of transient overvoltages.

The Surge-Trap Pluggable SPD product line offers plugs with various voltage configurations that are easily replaceable upon failure without touching the base or the hassle of rewiring. The SPD’s features include a visual indicator, easy installation, fail-safe design, mechanical coding and remote monitoring. Photovoltaic configurations are also available.

The Surge-Trap Pluggable SPD plays a critical role in helping to protect people and equipment from harmful transients. It is especially important within industries such as agriculture, medical, solar power, telecommunications, transportation, and wind power where overvoltage problems caused by internal and external power disturbances are common.