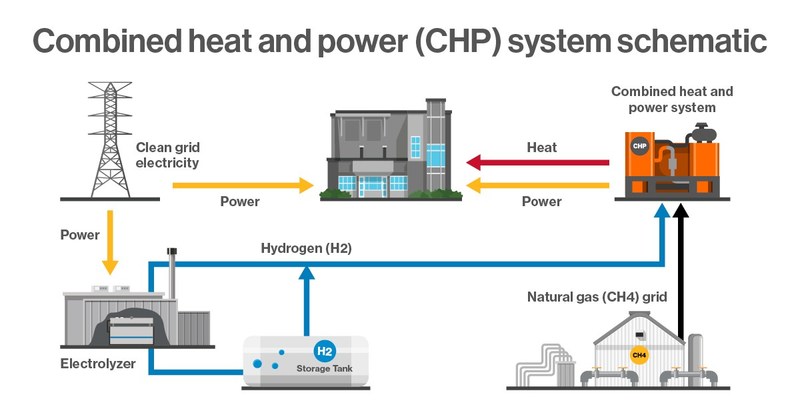 The combined heat and power (CHP) system operates via an engine that drives a generator, producing electricity. The residual heat created during this process is recaptured and utilized. (CNW Group/Enbridge Gas Inc.)

Enbridge Gas Inc. (Enbridge Gas), along with 2G Energy (2G) and CEM Engineering, has announced that it will install a combined heat and power (CHP) system with full hydrogen capabilities at Enbridge Gas’ Technology and Operations Centre (TOC) in Markham, Ont. early next year.

This is a first-of-its-kind project in North America, and its success will open the door for similar hydrogen-powered projects across the province.

“Green hydrogen is a viable contender in Ontario’s shift to clean energy solutions. We are proud to work with 2G Energy and CEM to advance this technology and expand our hydrogen hub in Markham, Ontario. This is an important example of the investments Enbridge Gas is making across multiple markets to green the natural gas grid while continuing to meet the demand for safe, reliable and affordable energy,” says Michele Harradence, President, Enbridge Gas Inc.

The overall goal is to power the facility on 100 percent hydrogen. The system can take natural gas, hydrogen or a blend of gas ranging from 25 percent to 100 percent hydrogen, and can transition between fuel sources in minutes, which optimizes efficient energy use and reduces emissions while maintaining maximum reliability. It operates via an engine that drives a generator, producing electricity. The residual heat created during this process is recaptured and utilized.

“Having already sold several hydrogen CHP units to European countries outside Germany and especially to Japan, we are now pleased that our hydrogen solutions are also gaining recognition in North America. Our first successful placement of a hydrogen CHP in North America is also an incentive to further strengthen and expand our global technology leadership in hydrogen,” says Christian Grotholt, CEO, 2G Energy.

Innovative and collaborative solutions are needed to achieve net-zero emissions by 2050. With hydrogen-fuel flexibility, this mature technology is being deployed as a viable way to green the building sector, which is the second largest source of GHG emissions in Ontario.

“We are excited for the opportunity to support Enbridge’s commitment to Ontario and Canada to reduce carbon emissions while providing low-cost resilient energy. Having completed several successful natural gas-fuelled CHP projects with Enbridge over the past several years this project represents the next phase of practical and reliable energy systems,” says Dan Jones, CEO, 2G Energy, North America.

While this project is small in scale, its implications are impressive. The system could consume approximately 78,000 kg of hydrogen annually, and the expected GHG emissions reduction when it’s operating solely on hydrogen is approximately 133 tonnes of CO2e — that’s roughly equivalent to removing 28 passenger vehicles off the road each year.

CHP systems are extremely resilient as they operate independently of the main grid yet are complementary to it. They are also versatile and can be employed in a wide range of sizes, with demonstrated compatibility in different applications, fuel sources and technologies.