News
Nexii will help Abbotsford Popeyes save energy, cut emissions by about 30% 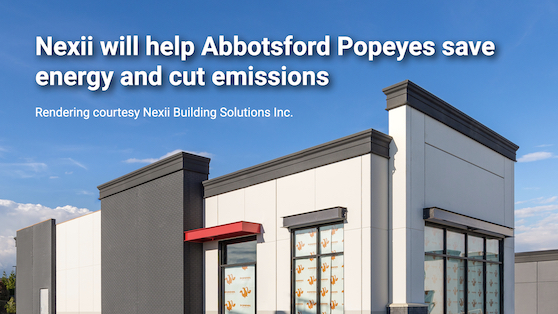 While Popeyes now has 12 restaurants in the province, Nexxi says this location is the first to be constructed of “building materials and technologies that are significantly more sustainable than those used in traditional construction”.

Nexii anticipates its technology will reduce the restaurant’s operational building carbon emissions by about 30% as a result of the building material and assembly process chosen, saying its proprietary Nexiite (which is used within its building panels) is more thermally efficient and less carbon-intensive than concrete.

Capital Home Energy concluded the airtightness testing of a Nexii-constructed Starbucks building showed air changes per hour of 2.17 (at 50 Pa) compared to 3.4 for typical construction based on the National Energy Code for Buildings—a 36% improvement.

The same third-party tester reports the airtightness testing of the Nexii pilot laneway house in Squamish, B.C., demonstrated air changes per hour of 1.96 (at 50 Pa), a 46% improvement over baseline.

The Abbotsford Popeyes restaurant is expected to open this fall.