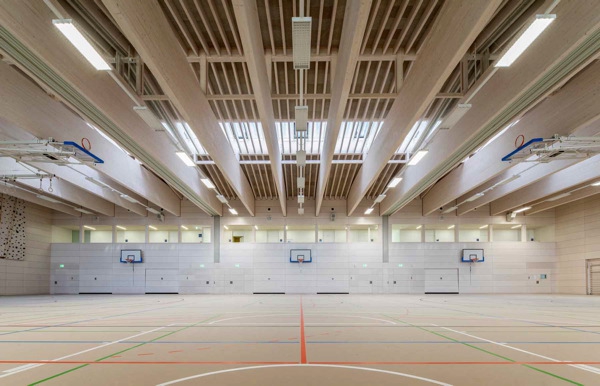 Built as a woodframe structure with glass roofs, photovoltaic installations, special air-conditioning systems and heat sensors, this school in the city of Augsburg generates more energy than it requires daily for operational needs, according to Osram.

The installed daylight system achieves significant energy savings because artificial light must only be activated in a supplementary way according to needs, Osram says. For this purpose, the maintenance-free louvres were integrated into the intermediate pane space of the roof light fenestration of the sports hall, auditorium and the classroom buildings. The highly-specular louvres, manufactured with ultra-pure aluminum, enable only diffuse, cool daylight to enter the space while hot, direct sunlight is reflected outwards, Osram explains. Another advantage is that larger areas in the roof construction can be opened than would normally be possible due to heat and glare restrictions.

Simultaneously, the “bright and transparent spatial effect achieved underlines the educational concept of the school that places much emphasis on the unrestricted development of pupils,” the company adds. “A part of this is having less traditional frontal teaching to allow work based on groups and the independent processing of lesson content. It’s here that daylight can be used in a supportive and activating way to promote concentration and increase attention levels.”

The “Schmuttertal”, where the school is located and after which it is named, is a meadow landscape near to Augsburg. Teachers and pupils moved into the school in September 2015. The school is one of the largest woodframe buildings in Europe and the “most up-to-date school in Germany”, says School Director Günter Manhardt.

The new construction was subsidised by the German Environmental Agency (DBU).