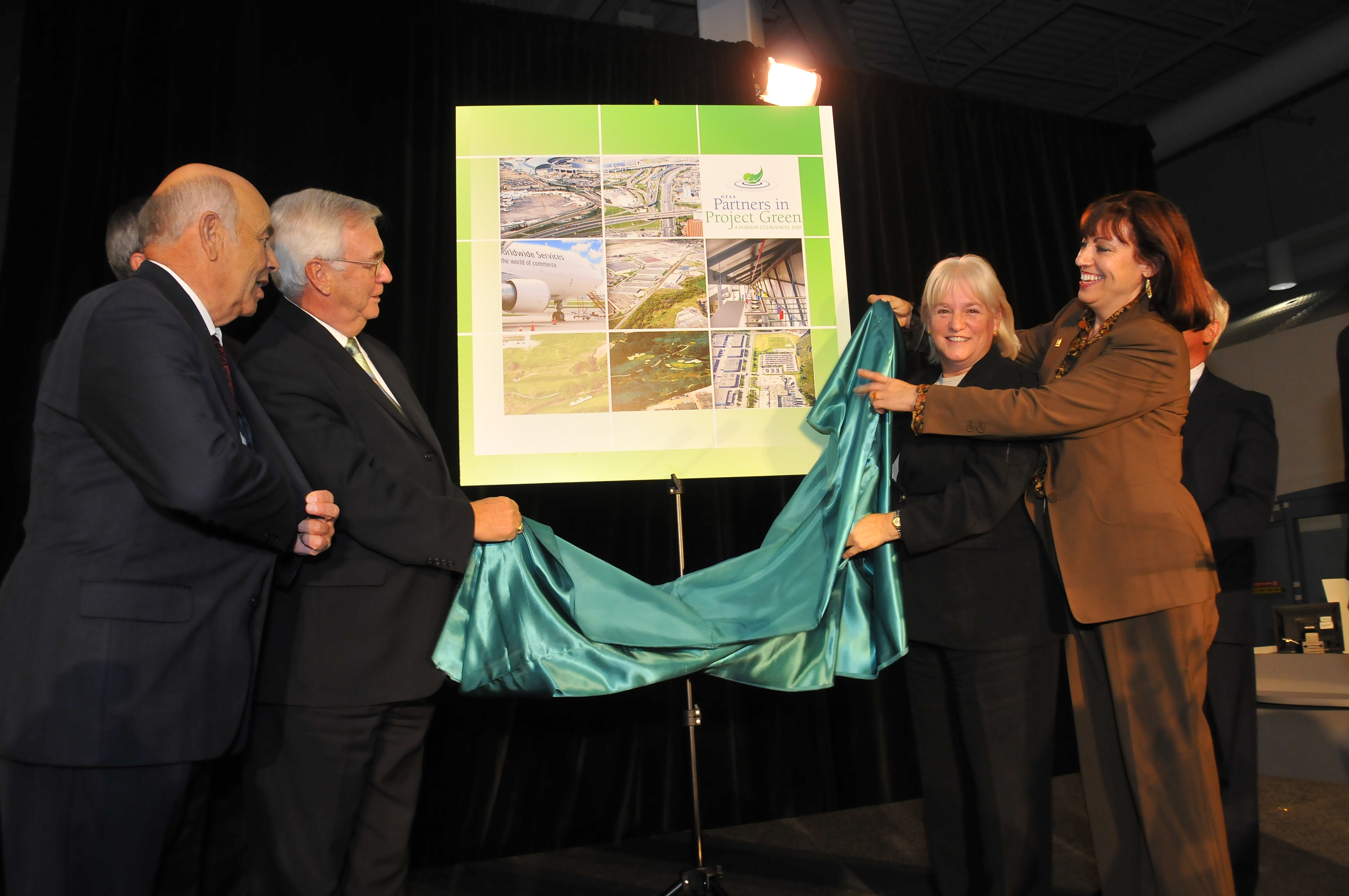 Many businesses are working to be more energy efficient and environmentally conscious. But one business alone can only do so much. Partners in Project Green (PPG), a new eco-business zone, hopes to open up new opportunities for the 12,500 businesses in the 12,000 hectares of industrial and commercial land surrounding Toronto Pearson International Airport.

PPG’s aim is to help businesses reduce resource costs, uncover new business opportunities, and address everyday operational challenges in a green and cost-effective manner. The aggregate power consumption for the area was 5.8 million MWh in 2007, which represents 1/26th of all of Ontario’s consumption. The target is to reduce this by 20 per cent and have 10 per cent of the area’s power come from renewable sources by 2015.

By attracting big players in the region, like Molson and Coca-Cola, as well as innovative companies like Lange Transportation, PPG has started 2009 with a strong steering committee, big plans and some real targets. Much more than a PR effort, this initiative appears to have real legs.

Holistic management
The initiative is the culmination of over a decade of partnership between Toronto and Region Conservation (TRCA) and the Greater Toronto Airports Authority.

“A number of years ago, the TRCA and the GTAA partnered to assess the aquatic and natural heritage conditions around the airport,” notes Chris Rickett, project manager for PPG at the TRCA. Rickett was tasked with finishing that report when he came on board at the TRCA. While the report offered a number of opportunities, the TRCA suggested that they look beyond natural heritage, and take a look at energy and other opportunities “holistically,” as Rickett puts it. The TRCA took on the task of coming up with what that would look like.

“We did a lot of consultation with the business community, and got a real understanding of what the flows in the area were like — land use, job density, transportation and, most importantly, an idea of what the energy and water flows look like, and where there are opportunities for reductions.”

Rickett was surprised by some of the opportunities.

The area actually falls within four municipal jurisdictions: The City of Toronto, Region of Peel, City of Brampton, and the City of Mississauga.

“Bringing together the data from four municipalities and having it all speak to one another in economic development terms was something remarkable,” says Rickett. “When we started the project, there was excitement in all four municipalities on the economic development side for what this could create, not only creating value for the business community but also the branding opportunities. So they all got on board.”

Business buy-in
Businesses have also seen great value in the concept of pooling their intellectual resources and partnering to create change in the region.

“One thing I find fascinating about this initiative is that it’s a non-competitive, one-purpose opportunity,” says Fergie Devins, vice-president of governmental and public affairs for Molson. “It’s about creating sustainable businesses, environmental stewardship, and we can all share in the learning opportunities there. That’s what makes it compelling. And with there being over 12,500 businesses in the area, if we could get 10 per cent of that group doing something that’s greener tomorrow than today, that’s a significant impact.” Devins is on the steering committee for the initiative.

For Molson, the program gives them an opportunity to share a number of best practices that they have developed over the years — such as the company’s employee energy awareness program in the brewery, and the manner in which many of their ideas come from employees — and the chance to develop new concepts that wouldn’t be financially viable if it were only them involved.

Devins brings up the concept of waste to energy as a great potential development that Molson could get involved with in partnership with a number of other businesses.

Toby Lennox, chair of the steering committee and VP of corporate affairs and communications at the GTAA, points to this same opportunity as a great possibility.

“We have a food waste reuse team on the committee,” Lennox notes. “Due to the sheer number of food producers in the area and the amount of waste that is created, we are discussing whether there’s anything we can do with that. What can we do as a group that gives us power that as an individual company we couldn’t pursue?”

“What I think is great about this is there is going to be action here,” says Devins. “This is not a group of people coming together just to say nice things, it’s a group of people who want to take action to make things happen.”

There are four teams working specifically on energy related projects:

• Eco-efficiency — This is a partnership with NRCan, Enersource, Hydro One Brampton, Toronto Hydro and Enbridge, to develop and deliver eco-efficiency programming to businesses in the area. Through this group, PPG is currently offering a one-window program for businesses to receive a free-assessment of their facility for potential cost savings and help with coordinating financial assistance for implementation. The target for year one is to engage 60 companies in this program.

• Green building retrofits — This team brings together a number of the large property management firms and owners to devise strategies for retrofitting large portions of their portfolios.

• District energy — This team hasn’t been established yet, but Fergie Devins notes it will be in the coming months, and it will look to capture the waste steam from the three electricity generating plants around the airport and use it for heating and cooling buildings in the area. A feasibility study will be completed this year.
Molson’s Doug Dittburner is likely to be engaged in the effort.

• Food waste reuse — This group is currently completing a feasibility study looking at the potential to capture food waste from the area to generate electricity through biogas. A number of large food processors, as well as some biogas companies, are involved in this effort.

Demonstrating leadership
Eric Lange, owner of Lange Transportation, is opening up the doors at his company to show others what it’s possible to do with the right focus on living green and being energy efficient.

“We’re trying to be part of the leadership group that is showing companies what can be done,” says Lange. “What I don’t want to be is part of the group hoping that government will come along and put all kinds of programs out there. We are taking a very active role in not just practicing but fully living green.”

As an example, Lange notes that his office is lit by daylighting technologies rather than fluorescent tubes.

“I have fluorescent tubes available, so if it’s five in the afternoon and dark, I’ll still have light. But most of the day I don’t need them,” Lange notes. The company has also installed geothermal technology to heat and cool its warehouse.

“To show this to other companies, I certainly rely on the TRCA and their whole program,” says Lange. “They are the ones deploying the message. We are just one of the companies they can point to and say, ‘There you go, that’s how you can do it.’”

But Lange also expects to gain insights from other companies. He notes that Coca-Cola is doing innovative work with their trucks that he hopes to learn from once they have some feedback. Meantime, companies like Wal-Mart have been through the Lange facility to observe his use of geothermal and different lighting technologies.

Green purchasing
Each participant in PPG will, no doubt, have projects that they have a particular interest in. For instance, among the various teams, bulk purchasing is one of a few that has sparked the interest of the GTAA.

“I think there are big opportunities there that we haven’t yet realized,” says Lennox. “If there is a program by which we could bulk buy solar or wind products, just think of the sheer area of roof space you’ve got here.”

Chris Rickett of the TRCA notes that they are looking at bulk purchasing from green building suppliers and cleaning suppliers in the area, and considering a bulk solar thermal purchase for 2009. A lighting bulk purchase may be a possibility as well.

“A lot of this we can do through the Clinton Climate Initiative,” says Rickett. “That organization already has a bulk purchasing network established, and we’re looking at how we can access that for companies in the area. Those prices are anything from five per cent to 50 per cent lower than standard prices, so that starts to make a lot of things a lot more feasible for companies.”

Partners in Project Green isn’t the first initiative of its kind. There are developments in Regina and Halifax, but as Toby Lennox notes, “what they miss is the scale, the diversity. In doing this, we’re trying to leverage the scale and the connectivity between various companies. Molson and the GTAA can’t share a physical plant to reduce, say, greenhouse gas emissions. But both do produce a great deal of organic waste, they could be well served by a district energy program. We haven’t even begun to explore such a project as a business relationship.”

Remarkably, much of the planning for this started less than two years ago, and already approximately 60 companies are involved, including Woodbine Entertainment Group, Dufferin Concrete, Pratt & Whitney and Bayer.