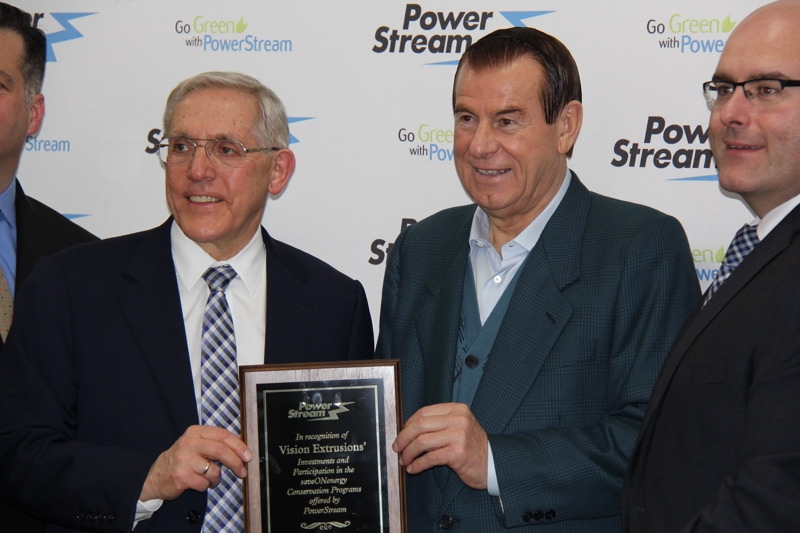 PowerStream and Collus PowerStream were the first LDCs to have a CDM plan approved by the IESO, said Chiarelli, offering his congratulations.

“PowerStream has always been committed to offering CDM programs that make a significant difference to the customers in the communities we serve,” explained Maurizio Bevilacqua, PowerStream board chair and Vaughan mayor. “We were proud to be the first Ontario LDC, along with Collus PowerStream, to submit our plan under the Conservation First framework, which we firmly believe will help our customers better manage their electricity costs.”

Vision Extrusions said it has taken advantage of retrofit initiatives and other conservation offerings provided through PowerStream. They have an embedded Energy Manager and participate in the IESO’s DR 3 Program.

The company’s integration of energy-efficient programs and technologies in its operations, serves as an example of how firms can take advantage of conservation programs offered by their respective LDC under the new framework to help reduce their electricity bills, said PowerStream.

“We have worked closely with PowerStream on numerous CDM initiatives over the last few years,” added James Di Giorgio, Vision Extrusions president. “The savings and incentives earned from these initiatives have enabled us to expand our business and improve our bottom line.”

The Conservation First Framework overseen by the IESO provides LDCs with long-term, stable funding for conservation programs that will reduce electricity consumption by seven terawatt-hours or seven billion kilowatt-hours by December 31, 2020. This is enough to power 700,000 Ontario homes for a year, according to the framework. All LDCs in Ontario must submit a CDM plan to the IESO no later than May 1, 2015.