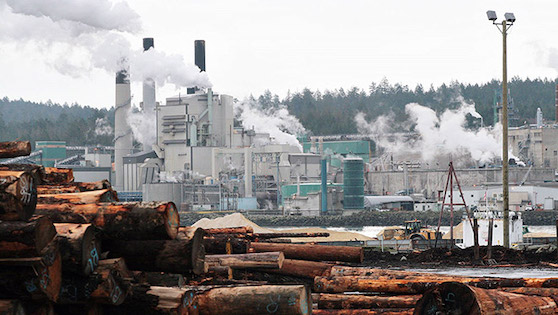 Alessandro Deviato is the BC Hydro-funded Industrial Energy Manager at Harmac Pacific. During the pandemic, he saw an opportunity to use BC Hydro’s 100%-funded industrial studies to explore potential ways of increasing Harmac’s efficiency.

“I was in the first two-year cycle of the Energy Manager role at the time,” says Deviato. “We were running at full capacity for the whole of Covid-19, and there were no large capital projects, so I had time to take advantage of BC Hydro-funded programs to focus on future projects.”

In all, Deviato managed to get eight studies funded: six efficiency studies and two low-carbon electrification (LCE) studies. These led to a range of upgrades and innovations, including:

“The mill was built in the 1960s, so you can imagine how inefficient the office building HVAC systems are,” says Deviato. “They’ll be modernized with updated control systems and refurbished equipment. Pulp mills are typically quite frugal when it comes to non-pulp related spending, so the office workers are excited about this one.”

The energy studies led to several pump upgrades. One project involves downsizing some older pumps that were repurposed from another part of the mill. Another involves adding variable frequency drives (VFDs) to processes with older control valves.

“VFDs will give us much more control over the motor speed and flow of the process fluid, plus they’ll save us energy,” he says.

There’s also a much bigger project involving four massive 800-hp pumps that control all of the mill’s effluent. “We’ve been aware that they’re not very energy-efficient for some time, but they do a sensitive job and they do it well. The last thing we’d want is some kind of overflow, so we’ve always approached them with caution.”

“But with BC Hydro’s incentive, we were able to spend some dedicated time looking at the issue to understand what needed to happen and how much it would cost. It’s mainly control-based: revamping the controls so everything runs more efficiently, along with upgrading two of the four pumps to common VFD technology.”

“An inefficient use of air was brought to our attention by an operator in the Recaust area,” says Deviato. “So we’ll be replacing the current air-cooled bearing system with a water-cooled one.”

This simple analysis was done in-house that led to great energy savings and a funded project. It shows the importance of communicating with operators who are in the field and see the equipment and processes on a daily basis.

Deviato started looking into lighting upgrades in Summer 2020 and it quickly snowballed. “As people heard about it, they kept highlighting areas we should review, and we soon realized that if we were going to make the move to LED, it would have to be across the entire facility. That means 2600 fixtures, everywhere from offices to outdoor lighting, to control rooms and process bays.”

And it’s not just lighting fixtures. A lot of the current lighting runs 24/7, so there’ll also be occupancy sensors and photocells for outdoor lighting.

“It’s a huge change,” says Deviato. “And it wouldn’t have been possible without the BC Hydro incentive. The payback would have been 11-12 years but, with the incentive, it’ll be more like two years, which really motivated us to do it.”

Don’t worry, no pigs were harmed in this final project: hog fuel is the name for wood waste in a pulp mill. It has, typically, 50-65% moisture content, which goes directly into a boiler as fuel which generates heat. The boiler takes this heat and transfers it to incoming feedwater to generate steam.

Any water that can be removed from the hog fuel before it goes into the boiler has a big impact on emissions and boiler performance.

One of Deviato’s low-carbon electrification studies produced a two-phased approach that takes waste heat from the mill’s sewers and runs it through industrial heat pumps to raise the temperature. The heat is then used in a belt dryer to help evaporate the water off the hog before it goes into the boiler (a.k.a. hog drying).

The project increases the mill’s electrical load but reduces the amount of supplementary gas required for the boiler, lowering emissions—and Harmac’s carbon tax—in the process.

“Using waste heat and heat pumps is not a new idea,” says Deviato. “But we believe our system concept may be a first for the pulp and paper industry in North America.”

Deviato is very happy with what BC Hydro has helped Harmac to achieve. “It’s a great relationship,” he says. “Everyone at BC Hydro has been positive and supportive… I’ve only got good things to say!”

Do you need help with a project?

If you’d like to explore our 100%-funded industrial studies or are interested in our Custom Incentives, contact your Key Account Manager or Regional Energy Manager, or call us at 604-522-4713 in the Lower Mainland or 866-522-4713 elsewhere in B.C.

Originally published by BC Hydro, August 2021. Reprinted with permission.