January 24, 2013 - A new report finds that close to $340 million is spent providing heat and power to Ontario’s public schools. 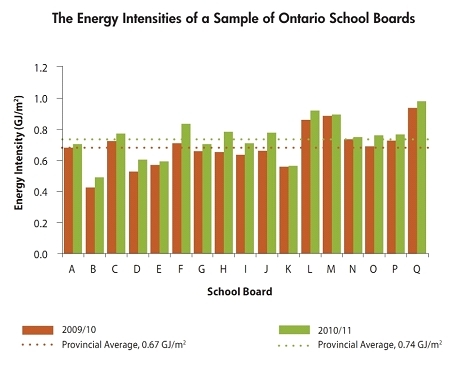 The Ontario Environmental Commissioner, Gord Miller, says more money could be spent on in-classroom education, if the Ontario government and the province’s school boards improved their efforts to reduce their electricity and natural gas bills.

Earlier this month, Miller released Volume Two of his 2011 Annual Energy Conservation Progress Report—an annual review of reductions in energy usage, increases in energy efficiency, and the progress and barriers to energy conservation. Volume One of the report was released in June 2012.

“There is great potential for savings in improving the energy efficiency of schools,” says Miller, “and fortunately, energy is one of the few expenses that can be reduced without affecting the learning environment.”

The report states the Ontario Government had to abandon its goal of reducing school energy usage by 10%, because some schools could not measure their energy consumption, which led to the launch of a Utility Consumption Database (UCD) to collect data on the electricity and natural gas used by every public school in the province.

The Environmental Commissioner points to the success of the Simcoe County District School Board (SCDSB), whose data on energy usage showed a range in energy efficiency among its schools. “By replacing windows and boilers, changing lights, and improving heating and air conditioning equipment in just a third of its schools, in a three-year period the Board realized a 16% reduction in energy usage per square metre, and saved more than $500 thousand annually.”

At this time, access to the database is restricted to school boards.

“The Ministry and the boards need to sort this out. The Ministry says it won’t publicly release the information on the energy efficiency of individual schools, because the data belongs to the school boards. But I believe parents, students and community members would like to know the energy performance of their schools,” says Miller. “Companies with expertise in the field could do an analysis of the data, and offer innovative solutions to improve energy efficiency.”

Related
Sheridan College commits $30M to Mission Zero initiatives
Managing energy for one of the largest asset portfolios in North America
All about earth tubes: an energy-efficient way to heat/cool buildings
Hospitals across Ontario are “important partners in reducing energy use”
Tags