March 24, 2015 – Fine Choice Foods knows a bit about growth. The Richmond-based maker of Asian foods has expanded numerous times, from a simple storefront to a multi-building facility that sends dumplings and spring rolls across Canada and into the U.S. 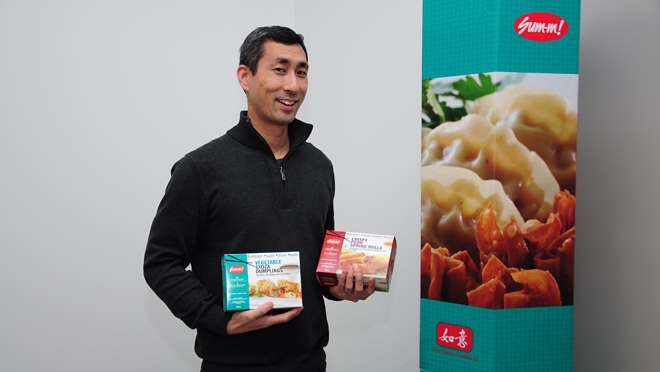 The company used its most recent expansion as an opportunity to plan ahead for energy efficiency. But it was actually a Customer Site Investigation (CSI) of an existing plant that helped it get started.

“We heard through the BC Food Processors Association that processors could get an energy expert to look through your facility and give you some energy recommendations for free,” says Dean Minamimaye, the business operations manager for Fine Choice.

An energy expert from the Power Smart Alliance completed the investigation and gave Fine Choice a list of options for improving their energy efficiency and saving money.

During the visit, the Alliance member also learned that Fine Choice was about to retrofit an adjacent building, which was formerly a printing facility. This included significant renovations to convert the facility for food production.

• Hot gas defrost system: Similarly, refrigeration coils in walk-in coolers and freezers are defrosted by re-utilizing heat cast off by the system itself. Regular defrosting is necessary to keep the coils working efficiently; the heat reuse system uses less energy and defrosts more quickly than traditional electric heaters. A quicker defrost also means the system draws less energy to return to its normal temperature, and the unit’s overall temperature is more stable.

•  High R-value insulated panels: Using extra-efficient wall panels for walk-in freezers and coolers was more expensive up front, but means cooling isn’t lost as quickly through walls. Minamimaye says working with the New Plant Design program also helped Fine Choice identify a cooler that might be used in future as a freezer, and invest in additional insulation up-front to efficiently accommodate future needs.

•  Variable frequency drive (VFD) heat exhaust system: Refrigeration compressors cast heat, requiring an exhaust fan system to carry it out of the facility. VFDs on the fans means they run only as much as required, compared to standard fans that run at full speed all the time.

•  Computerized refrigeration control system: The plant’s equipment is scheduled and monitored by computer, ensuring maximum efficiency. Rooms that are not needed for a day’s production run are now shut down, so cooling isn’t wasted. “It also shows us a graphic of the whole production facility and allows us as operators to better manage our system,” says Minamimaye.

The New Plant Design project qualified for $63,000 in incentives and resulted in energy savings of 384,000 kWh a year.

With the new plant completed, Minamimaye went back to the report generated by the Customer Site Investigation, and has now launched an air compressor upgrade project.

A single 50 hp compressor will replace three older 15 hp units. The new compressor’s variable frequency drive will allow it to smoothly ramp up and down as the plant’s air requirements change.

The project qualified for a $10,000 incentive through the Self-serve Incentive Program and will save Fine Choice an additional 25,000 kWh per year in energy. Minamimaye says getting internal support for the project was easy.

“We get such great incentives from BC Hydro,” he says. “In our internal discussions it just came down to which [compressor] model we want, and where we could fit it.”

“I think everybody in-house feels that it’s the right thing to do too. We want to be conscious about the environment, about how we’re using electricity and other resources. Obviously we’re here to make money, but when we can save costs, and the return on investment makes sense, it’s a no-brainer to pursue these types of projects.”

PHOTO: Dean Minamimaye, business operations manager for Fine Choice Foods, has learned firsthand how a free visit from an energy efficiency expert can pay off. (Photo BC Hydro.)