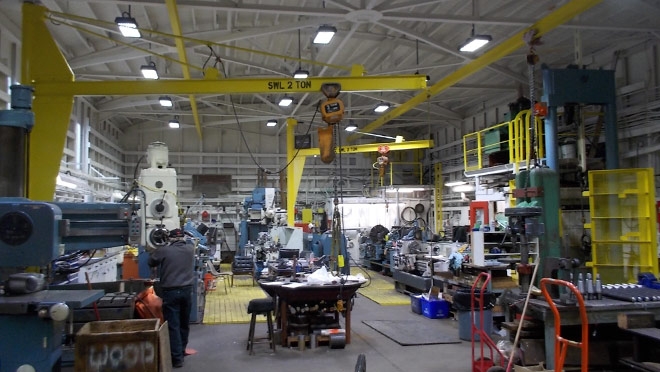 In a five-stage retrofit program, virtually all of the Victoria Shipyards’ high bay and exterior lighting fixtures have been replaced with industrial LEDs—about 500 lights.

“We used to position 1000W, high-pressure sodium fixtures on the dock bottom as well as underneath the ship,” said Peter Gilbertson, assistant ship repair superintendent. “It’s black on black in some areas and that means no reflective light. We also have dockside lights, and dock top lights, plus high bay and exterior facility lighting. Overall, the facility draws about 10MW of power.”

Gilbertson said in addition to cost savings, there are multiple other benefits from the upgrade, including: better light, less heat and greater safety, less breakage; less waiting and reduced maintenance costs.

In total, the energy efficiency improvements at the shipyards are saving the facility about $400,000 per year, says the shipyard, adding that the upgrade aligns with Seaspan’s core values of safety, efficiency and care for the environment. Making use of BC Hydro industrial incentives, the projects have an average payback period between two and three years, it said.

“I was an electrician in the Merchant Navy and have seen a lot of electrical innovations in the world,” said Gilbertson. “We also have a lot of wasteful usage in our society, so taking advantage of this incentive is just part of our corporate and personal responsibility—making things better, and feeling good about it.”