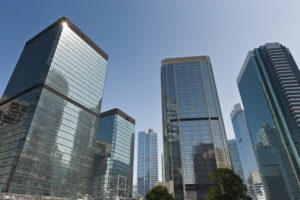 SolarWindow says it envisions “transparent flexible veneers that have a fastening system on one side and a transparent electricity-generating coating on the other”. To convert an existing passive window into an electricity-generating active window with a SolarWindow veneer, installers would cut the veneers to size on location and attach the fastening system to existing glass. Then, using a proprietary interconnection system, the company says the electricity generated can be routed into the building’s electrical system or connected directly to fixtures for use.

According to the company, SolarWindow can provide a one-year financial payback while producing 50-times greater energy than rooftop solar when modeled for a 50-story building.