Ethanol could be a valuable addition to our fuel resources, but it will require a new approach to its production.

Corn-based ethanol can displace the use of fossil fuels, but its widespread adoption comes with addition challenges — conventional ethanol production requires fossil fuels to manage the crop and to run the ethanol plant. Net fossil savings are only 20 per cent of the ethanol energy content. Although process efficiency improvements are likely to help over time, installing local generation could provide an immediate 300 per cent improvement in net fossil efficiency.

For example, consider a 55 gallon-per-year dry-mill ethanol plant that requires roughly 130,000 pounds of steam (38 megawatts) to operate, plus about five megawatts of electricity. There are two energy supply options to manage this. 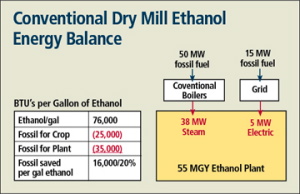 Conventional energy supply option
The conventional energy supply option minimizes initial capital costs, but is inefficient and expensive to operate. The plant will cost roughly $85 million to build, plus an additional $5 million for steam boilers, and will need to purchase five megawatts of electricity from the grid, which has an average delivered fossil efficiency of only 33 per cent. This approach uses 60,000 British thermal units (BTUs) of fossil fuel per gallon of ethanol produced — 25,000 for the corn crop and 35,000 for the ethanol production. Since a gallon of ethanol contains 76,000 BTUs, this process saves 16,000 BTUs of fossil energy per gallon of ethanol, or 21 per cent of the ethanol energy content.

The same ethanol plant can achieve a 300 per cent increase in net fossil savings by installing local generation, sized to the thermal needs of the plant, so as to use the byproduct heat of electrical generation to produce ethanol. A 50-megawatt combined-cycle gas turbine facility produces waste heat equal to this ethanol plant’s steam requirements.

After a market return on capital, the CHP approach provides $2.5 to $5 million annual savings to the ethanol producer, equivalent to 5 to 10 cents per gallon of ethanol. Net plant fossil savings per gallon of ethanol increase to 51,000 Btus, or 67 per cent of the energy content of ethanol. Re-powering existing dry mills with CHP would triple their net fossil fuel savings. In fact, many wet mills already employ highly efficient CHP plants.

There is an added benefit of local generation for ethanol plants that dry distiller grains. The CHP plant exhaust, after steam production, is still more than 300 degrees Fahrenheit and can replace dryer fuel. Overall electric efficiency will approach 95 per cent — almost triple the U.S. and Canadian grid average.

CHP plant economics work under current rules in which natural gas is the marginal fuel for grid power (California, Texas, East Coast in the U.S.). In the corn belt, which is also the coal belt, new gas-fired CHP plants do not compete with power from existing dirty coal plants, but require less per kWh than power from new clean-coal plants. Governments and regulators can induce CHP plants by paying those plants a larger share of the benefits they create.

For example:
New CHP plants defer or avoid construction of coal plants that will require eight to 10 cents per kWh delivered;
New CHP plants at existing ethanol facilities will reduce investments in transmission lines and line losses; and
Each CHP plant saves about 300,000 tonnes of CO2 emissions per year versus coal fired power, or 6,000 tons CO2 per million gallons of ethanol.

Federal governments could provide a production credit to CHP power roughly equivalent to the credits given to renewable energy. Provinces and states could offer long-term power contracts to CHP plants and avoid the default case of more expensive and dirtier power from new coal plants.

Powering ethanol production with balanced CHP plants can triple net fossil savings, reduce production costs and lower the net cost of electricity to society. The value is clearly there for businesses and governments with the will to invest the time and capital.

Thomas R. Casten is Chairman of Recycled Energy Development LLC and spent 30 years developing decentralized energy recycling projects. His book, Turning off the Heat, published by Prometheus Press in 1998, explains how the world can save money and cut pollution. You can reach him at: info@recycled-energy.com