July 7, 2015 - Built in 1975, the Westin Harbour Castle is a hotel overlooking Lake Ontario from downtown Toronto, consisting of two towers with 977 guestrooms. 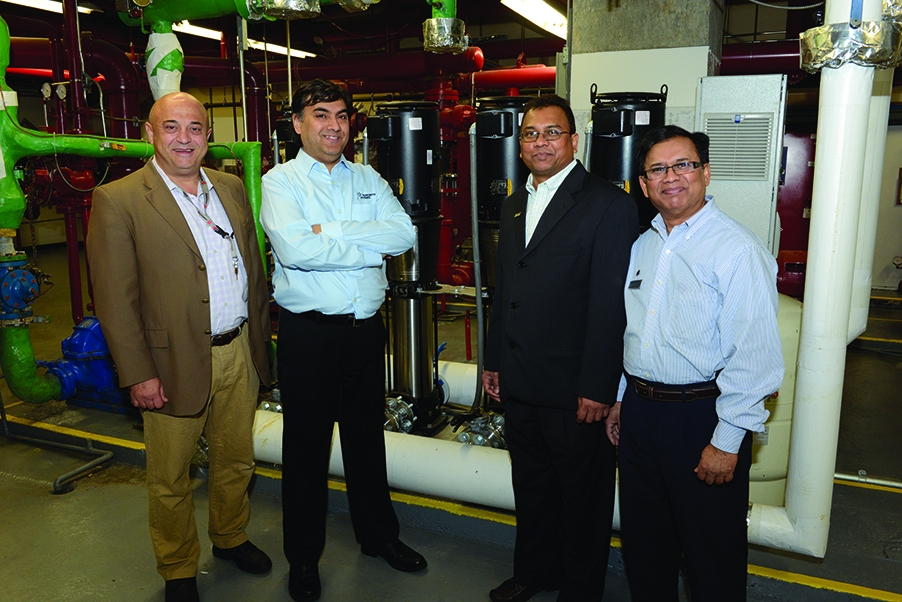 From left to right: Ammar Al-Taher

In keeping with the ongoing operations requirements of a major hotel, Venkatarao Swamy, director of engineering, took on the project of upgrading the hotel’s cold-water booster pump system. He said he knew the pumps were original from the time when the hotel was built and there had been maintenance issues. The pumps were substantially oversized for the building load requirements.

“Building dynamics have changed over the years,” said Swamy. “Low-flow toilets and showerheads mean much less demand for water. The new controllers are programmed for efficiency and that gives me peace of mind.”

Aside from the annual cost savings, the new pumps also contribute towards the corporate sustainability goals, which call for a 30% reduction in energy and a 20% reduction in water per room by 2020.

Booster pump systems are prime candidates for upgrades
Expecting that 40-year old pumps would not meet today’s energy-efficiency standards, Swamy initiated an audit with Toronto Hydro to make the case for the upgrade. He received an incentive that paid 50% of the $4000 audit cost.

The audit showed that the pumps were built to be seven times over capacity requirements and, since they ran constantly, were using significantly more energy than necessary.

Once the incentive was approved, there was an eight-week delivery time for the new pumps. Installation was flawless with no interruption to service, Swamy said.

One of many energy-saving initiatives
The Westin Harbour Castle Hotel has also received incentives for numerous other energy upgrades in the hotel including new air conditioning units in guest corridors, lighting upgrades to T8s and LEDs and window film in the foyer to reduce heat gain and increase comfort at seating near the windows.

The incentive estimate matched the final total
Swamy worked with Toronto Hydro and his contractor to apply for the incentive and specify the pumps. For budgeting purposes, it was important that the estimated incentive was accurate. Swamy notes, “The final amount came within a few dollars of the estimate. We were very pleased.”

Consider all pumps and hydronics for upgrades
While lighting and air conditioning may be the most obvious places to look for energy upgrades, it’s often pumps and hydronics that deliver the biggest savings.
Even if older equipment is performing well, it’s likely over-built and inefficient. An
audit can reveal the potential savings. New equipment can also mean less maintenance.

Similarly, exhaust fans in garages and equipment should be monitored for upgrade potential.