"We wanted to create the best spaces possible in an environmentally and fiscally responsible manner," says Ian McDermott.

“Research has to be innovative,” says Ian McDermott, UHN’s senior director of research facilities. “That applies to not only bench discovery, but also to the way we build and manage our research environments. We wanted to create the best spaces possible in an environmentally and fiscally responsible manner. This was absolutely the right choice.”

The tower was designed with 12 40-hp fans in groups of three (i.e. four triplexes) to serve each quadrant of the lab floor plate. Before moving on to a second phase of the project, which involved complimenting exhaust fans with Aircuity, the system was intended to produce a continuous discharge plume with an exit velocity of 3,000 ft per minute. UHN worked with Aircuity channel partner AirGenuity to ensure the exhaust fan application would achieve maximum savings in the building, as well as clean air.

New variable frequency drives (VFDs) were installed, enabling fan speeds to be ramped down or up according to the building’s needs. Also, a wind tunnel study was undertaken to ensure a safe beginning fan horsepower and prevent emissions from reaching any of UHN’s heating, ventilation and air-conditioning (HVAC) rooftop intakes, as well as those of its neighbours in a tight downtown area. The study determined the beginning fan horsepower could be reduced from 480 to 100 hp.

Now, when Aircuity detects any contamination in the exhaust plenum, the fan speeds are ramped back up until the air is clean again. This ensures both energy savings and a healthy space for researchers in the labs and occupants of the surrounding buildings. 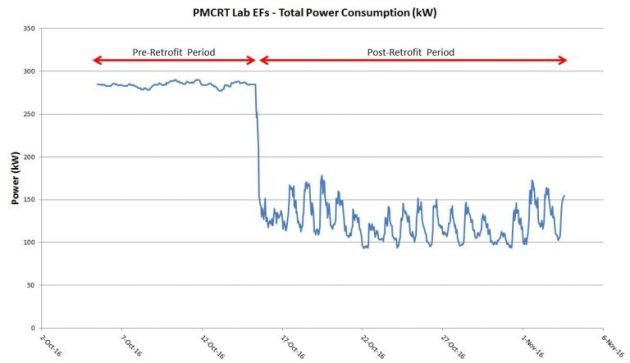 To confirm the savings, UHN conducted pre-retrofit measurements using the new system and running the VFDs at 100% speed, then compared the measurements to the power used once Aircuity’s exhaust fan application was implemented. This calculation showed annual savings of 1,550,000 kWh and electric peak demand savings of 111.7 kW, for cost savings of $200,000.

When coupled with savings from the previous Aircuity lab project at the cancer centre, the reduction in utility costs equals approximately $1,000,000 annually.

Associated with the University of Toronto (U of T), UHN is Canada’s largest organization of its kind. It also operates Toronto Western Hospital, Toronto General Hospital, Toronto Rehabilitation Institute and the Michener Institute. As such, more could be done—and at the same time as the exhaust fan application was initiated at the cancer centre, UHN installed Aircuity at Toronto Western Hospital’s Krembil Research Institute tower, as well.