News
Vancouver hotel and tower efficiencies to save over $70,000 annually

October 27, 2014 - It’s not easy to balance restrained elegance with modern sleekness, but the restoration of the historic Hotel Georgia in downtown Vancouver, B.C., has managed to do just that. 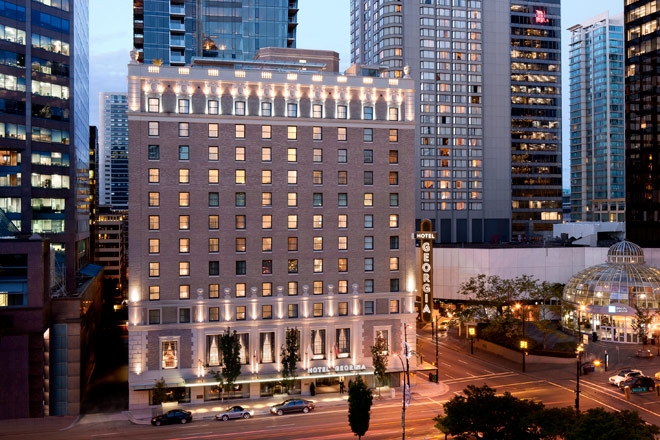 The multi-award-winning development plays the soft, brown brick of the original 1927 hotel against the shimmering glass and steel of the adjoining 48-storey commercial and residential tower, and somehow manages to make both stand out.

But the two buildings stand out in other ways, too, not least for their energy efficiency.

From the beginning, Ken Bowden, chair of Hotel Georgia Development Ltd., was determined the development would conserve as much energy as possible.

“It was a no-brainer for me,” he said. “I’m a Brit. I come from an environment where energy costs are through the roof compared to what’s paid here, so it’s just logical for me. But no matter what you pay for electricity, it’s good business, too. It’s all part of the asset value. A building is more valuable if it costs less to run, whether you’re operating it yourself, or selling it on.”

Energy-modeling study identifies savings
Early in the development process, in 2007, the company’s design team signed up with BC Hydro’s New Construction Program. Funding was provided for an energy-modeling study—a simulation of how a building might function throughout a year if it is designed and built with a variety of energy-saving measures.

The BC Hydro program also provided financial incentives for implementing those measures.

“An energy study makes sense,” said Bowden, “and we also received a nice incentive for installing the measures the study identified. It was a drop in the ocean, of course, of our overall construction costs, but it did help cover the initial extra costs for going for energy efficiency and seeking more energy efficient alternatives. I think being involved in the program also focused our efforts: it set a standard we were determined to exceed.”

Heat pump, occupancy sensors and more
The energy-modeling study indicated that the hotel and tower combined could save as much as 944,832kWh a year, or about $70,000 a year in energy costs, compared to similar buildings without those measures, which included:

• A distributed heat pump system for the residential portion of the tower that uses a common water loop for heating and cooling.
• Occupancy sensors in all the hotel rooms connected to a four-pipe fan coil system to ensure heating and cooling is reduced when a room is empty.
• High-efficiency window glazing throughout both buildings. The glass panels on the south side of the tower also include photovoltaic cells to convert sunlight into electricity to light the tower’s common areas, such as lobbies, elevators and stairwells.
• LED lighting and lighting controls.

A few more efficiencies added in
A number of other measures, too, have helped reduce energy use even beyond the levels identified in the BC Hydro energy study.

A ground-source (or geo-exchange) heat pump system was installed below the 8-storey underground parkade. The system extracts heat from the earth beneath the frost line and transfers it to the hotel and the commercial portion of the tower (the first 12 storeys) for heating; it then reverses the process to cool the two buildings in summer.

Some measures, like LEDs, may sound old-hat now, added Bowden, but they were not when the design team was first planning the buildings. And they are effective.

“The geo-exchange system and the photovoltaic cells are the big headliners, but in the hotel world, down time of rooms for maintenance is a big issue and so is annoyance to our hotel guests. The LEDs use less power and they last a long time, so there is less maintenance, lower running costs and less annoyance.”

In addition, he noted, having a single set of high-end amenities—one pool, one spa and one gym—for hotel guests and tower residents to share is also an energy saver. Guests and residents benefit from bigger and better facilities that also happen to use less energy than if they were separate.