Net Zero News
What does a Net Zero Energy home look like, anyway? 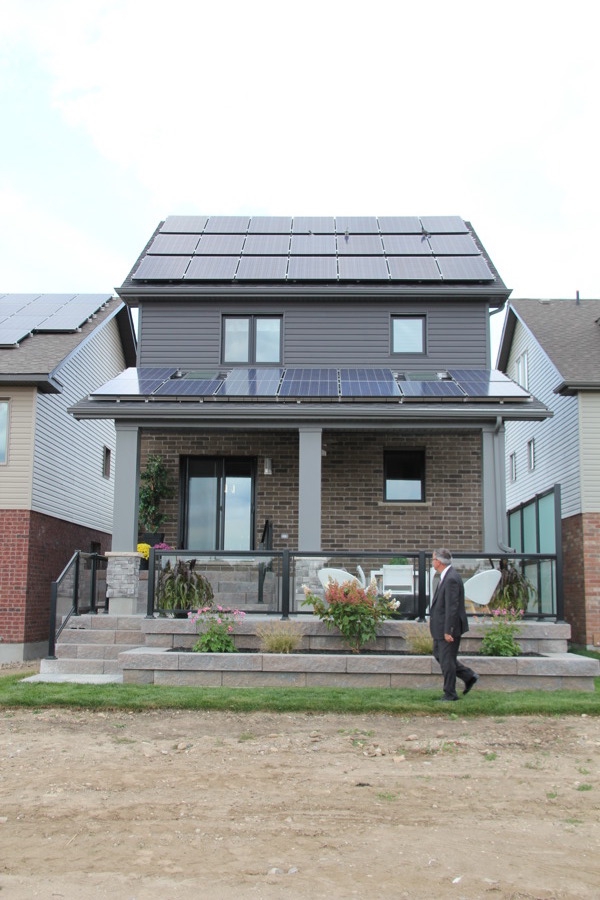 Energy Manager was on hand September 11 for the unveiling of Canada’s newest NZE home, built in Guelph, Ont. The house is the first completed as part of a national demonstration project to prove that NZE homes can be built on a community-level scale, with the goal of making these abodes—which produce as much energy as they consume on an annual basis—accessible and affordable to all Canadians.

Reid’s is building five homes as part of this project. Overall, five builders were selected to participate in the national project that will see the construction of at least 25 Net Zero Energy homes in four provinces—Nova Scotia, Quebec, Alberta and Ontario.

Unlike other custom NZE homes that have been built across Canada in previous years, Reid’s says this project utilizes existing technology and products that are readily available to the average builder.

“Instead of building these homes as one-off, custom-built projects, this project is geared to the mainstream public, and the low-rise production builder,” said Blake Seeberger, SVP Residential, Reid’s Heritage Homes. “In fact, standing on the driveway facing the house, there is little indication that this is a real-world example of the future of housing.”

The back roof tells a different story. The 33 solar photovoltaic (PV) panels from Bluewater Energy are a more obvious sign of the technology being implemented in this project. The panels will produce the energy required for the home to achieve NZE status. More importantly, the technologies underneath the facade are what make this NZE home “innovative and affordable”.

One of the critical technologies is the insulated and airtight design providing an advanced envelope system made possible by the Owens Corning CodeBord air barrier system, which reduces air leakage of the home. The home has triple-pane windows by Jeld-Wen, and incorporates the latest air source heat pump space heating technology from Mitsubishi Electric and a hybrid air source heat pump hot water tank from Rheem Canada.

“Today’s achievement is the product of years of planning and hard work by some of Canada’s brightest minds in the home-building industry,” said Goyda, adding that the NZE home project “will allow more homeowners across the country to help insulate themselves from rising energy costs”.

Built in the Westminster Woods community of Guelph, the project’s inaugural home will be used as a show house for the remaining four Net Zero Energy homes to be built by Reid’s Heritage Homes. The second home is already for sale while the remaining three will be completed by spring of 2016.

— Photos R. Francoeur and A. Capkun