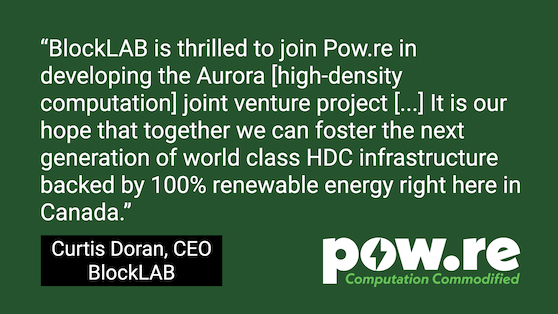 January 5, 2021 – Québec-based Pow.re Corporation (Pow.re)  and Labrador’s BlockLAB have signed a joint venture agreement to move ahead with the Aurora High-Density Computation (HDC) project in Wabush, Labrador. This site represents a milestone in the Canadian digital asset mining landscape as the location will go online with an initial 7.75 MW allowance from NL Hydro and a potential site scalability of up to 100 MW of renewable energy .

The value of the digital currency Bitcoin has seen tremendous growth through the final months of 2020, and this project could be a draw for eco-focused digital asset mining investors. The hydro power used by Aurora HDC is sourced from the Churchill Falls reservoir established in 1972, which has amortized over nearly 50 years to become practically carbon neutral. There’s also the added value of capturing heat waste at the facility.

At the closing of the agreement, Pow.re’s CEO Mike Blais-Cohen stated, “Pow.re is fortunate to have found partners with a breadth of expertise and experience in BlockLAB. Their team has been instrumental in securing access to power through the province, deploying the site’s infrastructure and managing daily operations. We look forward to expanding Aurora to its full potential with our partners.”

This agreement has the potential to be the first of many digital asset mining mandates finding a home in Canada. The Aurora HDC project’s fixed rate of electricity rivals some of the most competitive rates globally, and the geopolitical stability of the site’s location combined with its energy efficiency makes it more palatable for potential investors.

This comes at the same time that global mining leader China (estimated at 65% of current network hashrate) has begun restricting electricity and banking access to domestic crypto-currency miners while forging ahead in the development of its own digital Yuan.

On the prospects of the deal’s potential moving forward, BlockLAB CEO Curtis Doran commented, “BlockLAB is thrilled to join Pow.re in developing the Aurora HDC joint venture project. We believe this partnership will bolster our core values and accelerate the growth of our footprint in high-density computing. By collaborating with Pow.re, we will be able to further secure our foundation in Labrador’s business community and the digital asset mining industry at large. It is our hope that together we can foster the next generation of world class HDC infrastructure backed by 100% renewable energy right here in Canada.”