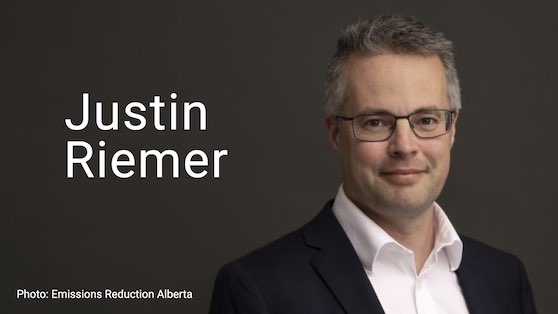 July 27, 2022 – Justin Riemer has joined Emissions Reduction Alberta (ERA) as CEO, replacing Steve MacDonald, who announced he would be stepping down.

“Justin is the right leader to take ERA forward. He has an impressive background in navigating Canada’s innovation system, building relationships inside and outside of Alberta, and developing a strong network in support of innovation and economic development that includes many of ERA’s stakeholders,” said Dave Collyer, ERA board chair.

He possesses over 25 years of experience, including leadership roles at the Government of Alberta, Alberta Health Services, and the Government of Canada. He holds a Master’s Degree in International Affairs from Carleton University, and a Bachelor of Arts (Honours) in Political Science.

“I am really excited about building on the strong foundation and legacy Steve has built,” said Riemer. “ERA has an incredible mandate, which I am deeply committed to, and I look forward to leading the exceptional team at ERA as we strive for further success.”

Riemer’s efforts will include expanding ERA’s partnerships and “amplifying the organization’s work in networks that can help create an even greater impact through emissions reductions and job creation”.

Emissions Reduction Alberta has been investing revenues from the carbon price paid by large emitters to “accelerate the development and adoption of innovative clean technology solutions”. Since its establishment in 2009, ERA has committed $796 million toward 220 projects worth $6.5 billion “that are helping to reduce GHGs, create competitive industries and are leading to new business opportunities in Alberta”.