November 2, 2011 - BC Hydro is one of Canada’s largest electric utility providers. It currently serves 1.8 million customers and operates 30 hydroelectric facilities as well as three natural gas-fueled thermal power plants. Its Port Alberni and Horne Payne Field Buildings are regional Operations Centers serving and servicing infrastructure throughout the mid-Island of Vancouver Island and the Lower Mainland of British Columbia, respectively. 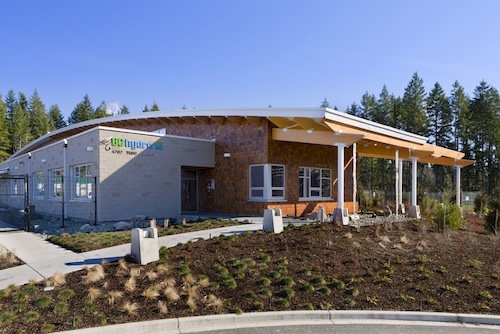 The Challenge
In 2007, BC Hydro hired Omicron, a full-service architecture, design, engineering and construction firm, to design the Port Alberni and Horne Payne buildings. New green initiatives, including the provincial government’s Energy Plan, commit BC Hydro to reach zero net greenhouse gas emissions and achieve electricity self-sufficiency by 2016. With these objectives in mind, BC Hydro sought to be as eco-friendly as possible in the construction of these two new buildings.

To meet the green initiative requirements and the Provincial Energy Plan, BC Hydro set an ambitious energy intensity target of only 60 kwh/sqm/year. This target represents approximately one quarter of the energy used in an equivalent building built to current industry standards. Needless to say, it was an aggressive goal.

Omicron says it knew that utilizing the right building products–more specifically, the right glazing systems–would be a critical factor in meeting the energy consumption target, as they can be an energy efficiency “weak-link” by allowing heat gain and/or heat loss based on the season. Omicron consulted with High Performance Glass, a B.C.-based manufacturer and supplier of high-performance glass, to source energy-saving insulating glass units to hopefully reduce thermal variance in internal and external temperatures by providing high R-values (low U-values) and solar control.

Describing the Heat Mirror as an energy-saving alternative to triple-pane insulating glass, Southwall boasts that one or more lightweight Heat Mirror films can be suspended within an insulating glass unit to create up to four insulating cavities to achieve center-of-glass insulating values up to R20 − with the same weight as dual-pane glass. “In addition, it blocks 99% of harmful UV radiation, reducing fading and averting negative health impacts,” it adds.

By utilizing triple-cavity Heat Mirror insulating glass (in this case, two Heat Mirror films suspended between two lites of clear glass to create three cavities), BC Hydro reported that it was able to exceed its energy consumption target without requiring argon gas fill–an additional benefit enabled by suspended film technology, says Southwall. The Port Alberni and Horne Payne buildings’ insulating glass systems, both with two inches overall dimension, achieved a center of glass U-value of .12 with an overall U-value (glass and frame combined) of 0.22, putting BC Hydro on track to meet the BC Energy Plan mandates, it claims. Additional performance values included a Solar Heat Gain Coefficient (SHGC) of .29, a Daylight Transmittance value (VT) of .42, and a Shading Coefficient (SC) of .34.

Summary
According to Southwall, growing global demands for sustainable design are increasingly leading designers and fabricators to specify more energy-efficient buildings. For the two BC Hydro buildings, both Omicron and High Performance Glass say they recognized that the key to realizing this design objective was to extract more robust performance from the building envelope by utilizing the right glass product.

Completed in December 2010 and April 2011, respectively, the Port Alberni and Horne Payne buildings are candidates for LEED certification, expected in late 2012/early 2013.