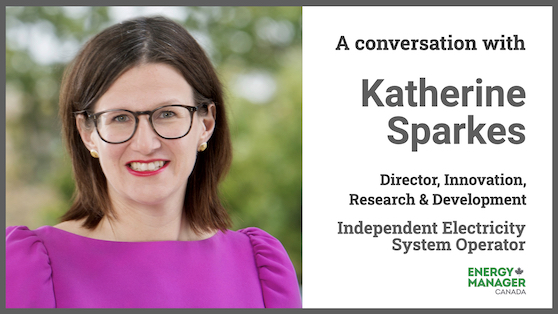 February 27, 2022 – Since its launch in 2005, IESO’s Grid Innovation Fund has been involved in over 200 projects that seek to support innovation “that has the potential to achieve significant electricity bill savings for Ontario ratepayers either by enabling greater competition in Ontario’s electricity markets or by helping customers better manage their energy consumption.

“By evaluating additional solutions that can provide the kinds of electricity products and services that we procure, we can increase competition,” explains Katherine Sparkes, Director, Innovation, Research & Development, with IESO. “And we know that increased competition is good for customers in terms of price management.”

The Independent Electricity System Operator recently invested $6.8 million through this fund into projects involving wastewater, a mining facility, and deep retrofit software. As suggested by the latest investments, everything is (potentially) on the table when it comes to energy efficiency and grid innovation, etc.

Katherine joined us to discuss how projects are selected for the Grid Innovation Fund (GIF) i.e. the process, the objectives, etc., and to reflect on some past and current projects.

When we asked her about a project that really stands out as having truly enabled customers to better manage their energy consumption, she pointed to the “Freezer Temperature Modification” project involving Brickworks.

The findings of that pilot resulted in amendments to a provincial regulation under the Health Protection & Promotion Act, 1990, which removed the maximum freezer setpoint temperature requirement (-18 C) for frozen foods, realizing persistent electricity savings province-wide. IESO has promoted this change to the restaurant industry, in partnership with trade organizations.

“Through this demonstration, the partners were able to successfully work for a regulatory change, moving from a prescriptive approach to food safety standards to more of a performance-based approach, with reduced regulatory burden and resultant energy efficiency. That’s a great example of a win-win.”

An important aspect of receiving GIF funding is that project proponents must also have skin in the game; that is, they also contribute financially. In the case of Brickworks, the GIF funded value was $166,450, while the total project value was $253,900.

We also asked Katherine whether any projects failed to live up to expectation.

“The answer is, Yes. We have had projects that didn’t pan out,” she says, adding that this, too, is an important aspect of the fund. “It’s about evaluating those solutions in a way that requires a very limited investment, so that you’re not making a much larger investment with ratepayer or public funds […] and then finding out that it doesn’t work.”

She pointed to a pilot project involving in-suite thermostats in multi-family residential buildings (MURBs) for electricity savings and load shifting. At the end, they learned the incentive that was being offered wasn’t doing a good job of driving load-shifting behaviour.

“The project demonstrated that the solution proposed wasn’t a good one and, frankly, that was a great outcome,” Katherine says, because project proponents were able to avoid a much broader deployment (and, correspondingly, a much larger investment) that would not be cost-effective.

A current project of which Katherine is really proud is the IESO-York Region Non-Wires Alternatives demonstration project (which entered its second year back in October 2021). According to her, the project is proving “that we can use those existing assets [and] effectively defer investments in traditional distribution infrastructure”.
[https://www.ebmag.com/ieso-york-region-non-wires-alternatives-demo-project-enters-year-2/]

“So that’s going to save ratepayers money, and it’s a model that can be replicated in other areas of the province.”