Building Enclosure
Use of Anti-Reflective Glass in Commercial Lighting Products

The selection of clear cover materials in lighting requires consideration and balance between optical transmission, optical interaction with the cover lens and its effect on light distribution, and economic considerations. The use of clear glass lens enclosures is rarely utilized as an optical feature. Instead, glass cover lenses are often incorporated to protect the optical system from environmental damage, or to protect human occupants and combustible building surfaces from failed lamp fragments. The long-time use of glass has been tied to optical clarity, mechanical strength for thermal and impact resistance, ease-of-use and sourcing, and UV resistance vs. other material options. 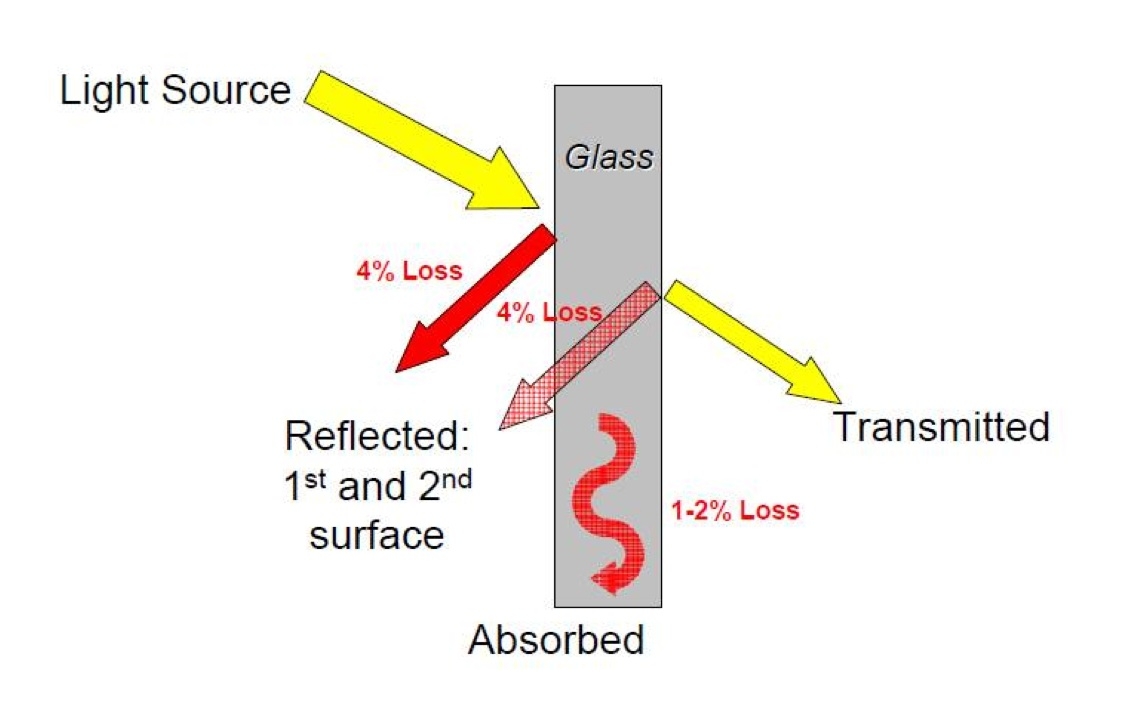 However, most glass enclosure products, interior or exterior, reduce the total luminaire efficiency due to inherent transmissive and reflective losses due to the material itself. Reflective losses include first surface (optical side) reflection which redirects light back toward the light source, and inter-reflective losses within the lens material. Transmissive losses can be attributed to the bulk materials of the glass chemistry itself and its absorption of visible light energy (e.g., FeOx). Additionally, the effect of refractive light redirection imparts a change in light distribution and compounds potential optical losses. The figure below shows the efficiency losses commonly seen with standard soda lime float glass without anti-reflective coatings.

The ability to minimize these loss factors helps optimize luminaire efficiency. The use of special glass chemistry (low-iron) and coatings (anti-reflective) can help to substantially reduce both the reflective and transmissive losses seen when using standard float glass cover lenses.

TO LEARN MORE, Download the PDF below, under Social Sharing.