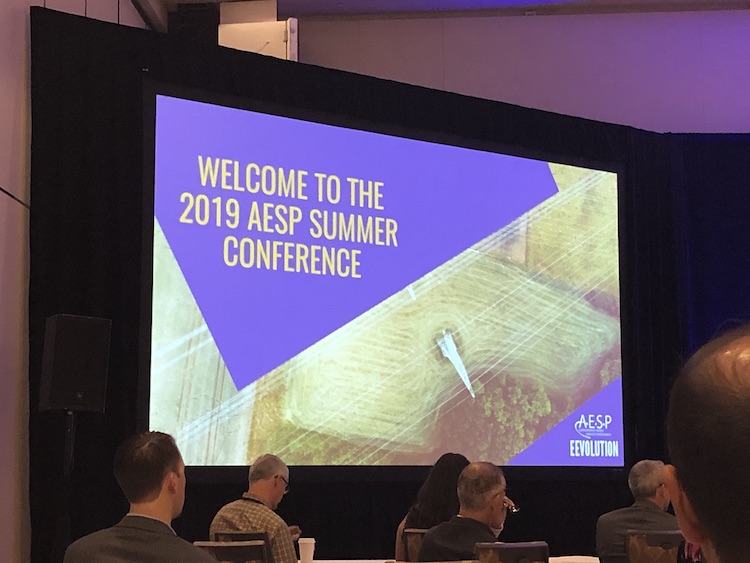 Earlier this week, the Association of Energy Services Professionals (AESP) returned to Toronto for its summer conference, providing the opportunity for a range of perspectives on energy-efficiency (EE) program designs, implementations and business models across North America.

AESP members represent utilities, governments, marketers, consultancies, manufacturers, suppliers and public agencies. As such, their policies and decisions have an impact on energy managers. And they are encouraged to speak at AESP’s conferences.

Branded as ‘EEvolution,’ the conference focused largely on the various ways in which “energy efficiency can compete as a resource,” as Terry Young, vice-president (VP) of policy, engagement and innovation for Ontario’s Independent Electricity System Operator (IESO), put it during the opening plenary on Aug. 28—following pre-conference program manager workshops on Aug. 26 and 27—at the Sheraton Centre Toronto.

The notion has been a major game-changer for utilities, which are now tasked with helping their customers—including energy managers—buy less of their goods. While IESO program design supervisor Sura Abdul-Razzak discussed market reforms that will affect how electricity is dispatched and priced, with the hope of better integrating EE programs with customer needs, Enbridge director of marketing and energy conservation Sarah Van Der Paelt spoke of how her company, a natural gas distributor, is actively working to move away from natural gas, in large part because of the associated greenhouse gas (GHG) emissions.

One of the first conference sessions, incidentally, explored common ground for these two types of utilities by discussing gas-and-electric EE program implementation. Salil Gogte, CEO of EcoMetric Consulting, pointed out such programs can achieve cost efficiencies by reaching overlapping customers of both forms of energy.

“There are opportunities to build synergies by offering programs together, such as strategic energy management, retrocommissioning and weatherization,” he said, citing examples from New Mexico and Pennsylvania, while ComEd senior program manager Jacob Stoll spoke of a joint-delivery initiative in Illinois.

Canada also has examples. Ariana Arguello, conservation assistance program specialist for FortisBC—which delivers both electricity and natural gas to customers in British Columbia—explained how she has worked with BC Hydro and the province’s government to develop a retrofit support program for social housing, covering everything from lighting to heat pumps to the building envelope.

“There are benefits to taking a holistic approach to EE and providing a one-stop shop,” she said. “We anticipated 25 participants per year, but in the one year since we launched, we’re already at 150!”

“More players need to provide ‘one window’ like they do,” said Raegan Bond, principal consultant with Montreal-based Dunsky Energy Consulting. 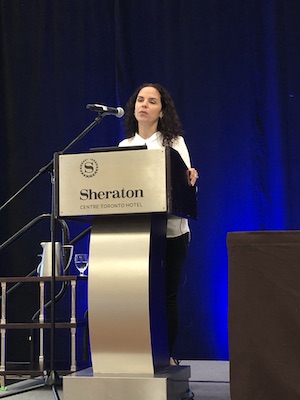 Ariana Arguello explained how FortisBC, BC Hydro and the provincial government worked together to create ‘one window’ to support energy-efficient social housing retrofits.

Tools for the job

By focusing on the overall goal of achieving energy consumption reductions, AESP members have found all sorts of different ways to help energy managers, as a technology-themed session illustrated.

In Michigan, for example, Franklin Energy launched a multi-tier program to encourage industrial, institutional and commercial customers—particularly in the dry cleaning industry—to remember to replace their steam traps.

“When steam traps fail, they waste natural gas,” said Joe Bickham, commercial and industrial (C&I) specialty program manager for Franklin, “but upfront third-party audit costs are too expensive. So instead, we offer the audit and cover the cost of the new trap.”

In another specialized example, Collin Coker, VP of sales and marketing for Viking Cold Solutions, explained how his company’s thermal batteries—high-density polyethylene (HDPE) ‘cells’ containing a mix of water and salts that store and release thermal energy as they transition between solid and liquid phases—allow frozen-food warehouses to save on cooling energy, particularly during peak-demand periods.

“A 93,000-square-foot warehouse in Richmond, Calif., used the cells during 13-hour peak periods, six days a week,” he explained. “They achieved 43% lower net consumption in kWh, 29% lower peak demand in kW and 50% more stable temperatures. The same technology is getting traction in Ontario in response to Global Adjustment (GA) charges.” 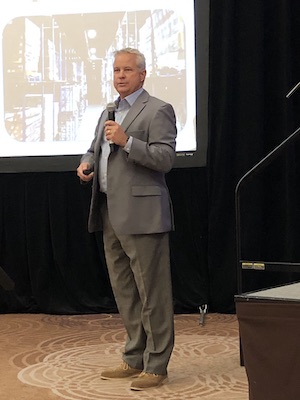 Collin Coker of Viking Cold Solutions explained how thermal batteries can save electricity for frozen-food warehouses.

Another main theme of the conference was collaboration. In addition to that between gas and electric utilities, municipal governments are more actively assisting energy managers, for environmental reasons. By way of example, Trina Innes, director of Alberta’s Municipal Climate Change Action Centre (MCCAC), described funding an energy manager program for municipal facilities, among other projects.

“Vancouver’s looking at retrofit building codes,” added Corey Diamond, executive director of Efficiency Canada. “As cities are on the forefront of climate change mitigation, we’ll soon see them get more resources to support new policies. It will be fast and messy!”

“We work with government, utilities and service providers, connecting them to work better with energy at a local level,” said Tonja Leach, executive director of Ottawa-based Quality Urban Energy Systems of Tomorrow (QUEST). “We need to start not with technology, but with the outcome we want to achieve.”

The end, not the means

Following through on that thought, Leach led a panel discussion at the end of the conference about taking an outcomes-based approach when planning deep energy retrofits for existing buildings.

“This approach is still a non-traditional one,” she said.

There are several examples where it is being taken in the Greater Toronto Area (GTA). One is the ‘Towerwise’ retrofit program, which primarily supports MURBs in the social/community housing sector.

“We use performance-based contracts,” explains Bryan Purcell, VP of policy and programs for The Atmospheric Fund (TAF) behind the program. “The nature of a retrofit across a large facility will depend on the owner’s priorities, but performance requirements keep people at the table and engaged over the long term, extending to operations and maintenance.”

“Our big hurdle will be the contract,” said Kyla Greenham, curator of conservation and environment for the Toronto Zoo, which is moving toward carbon-neutral operations and a 95% GHG emission reduction target. “I’ve already been working on this project for five years and there’s still a lot to figure out.”

“An integrated approach that sets outcomes to be achieved has been common in the information technology (IT) industry for 10 years or more, but it is still new to the construction industry,” said Wesley Bristol, business development manager for Ecosystem, which won an ASHRAE award earlier this year for taking just such an approach to reducing utility bills for Montreal’s Olympic Park. “It’s happening as municipalities have new climate targets and are asking industry experts and the market to help them get there.”