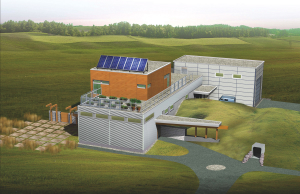 The Canadian GeoExchange Coalition recently announced the winners of the 3rd GeoExchange Excellence and Leadership awards. In total, more than 20 applications were submitted and pre-selected though a number of technical criteria including:
•    innovation, originality and complexity of the work in relation to the building use;
•    technical difficulties encountered / solved in the project; demonstrated energy savings;
•    to what extent the project influences building design in Canada and a more extensive use of geothermal energy;
•    whether the project forms part of a global energy efficiency plan; and
•    comfort for occupants and users.

Fifth Town is an excellent example of what the awards recognized. A large amount of energy is required in a building like Fifth Town, where heat is required for the cheese-making process, but cooling is required in a different part of the building for refrigeration and cheese curing. In addition, manufacturing facilities, such as Fifth Town, are especially difficult to make energy efficient.

Energy consumption in manufacturing processes is generally considered inflexible and changes in the process are typically rejected since a specific process is essential to the overall business plan. The Enermodal design team looked to a variety of innovative techniques to decrease energy use without affecting the cheese-making process.

Two important innovations were the use of geoexchange — that is, a heat pump system — and the radiant slab design of the cheese caves. The heat pumps provide hot water to the cheese-making process and simultaneously condition the underground caves where cheese is aged and cured.

The Prize for Leadership in the geoexchange industry was awarded to Stan Marco, co-founder and CEO of GeoSmart Energy Inc.

The Canadian GeoExchange Coalition acts as the industry catalyst to unite private and public sector stakeholders, and to expand the market for geoexchange technology in Canada. As the nexus of information, training, certification, industry standards and public awareness, the coalition’s mandate is to work with stakeholders to build the necessary infrastructure to foster the growth of the Canadian geoexchange industry. For more information, visit www.geo-exchange.ca.