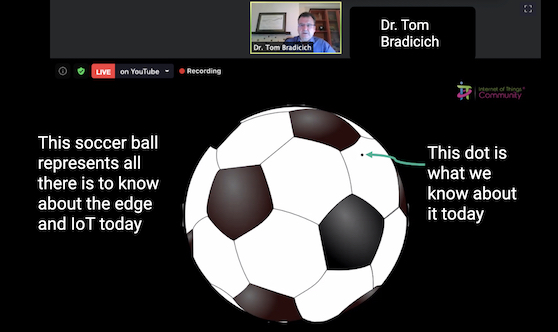 August 29, 2020 – The 4th Annual IoT Slam conference was held (virtually) August 19, with a mix of both live and on-demand (pre-recorded) presentations and panels.

While scrolling through the available sessions and speakers, I was amazed by the mix of both long-time industry pioneers and tech newcomers—all of whom had valuable wisdom and advice to contribute.

The content was delivered through both a live agenda and on-demand videos. While I tried to consume as much as possible, there were two speakers that particularly stood out for me.

The opening keynote speaker was Dr. Tom Bradicich, who recently became chair of the IoT Community’s Advisory Board.

I think it’s fair to say he’s been around.

And he delivers information is such a way that it is easily understood, without “talking down” to his audience.

Which I most assuredly appreciated.

In his opening address, then later in an on-demand video, Bradicich discussed the ease with which an organization can start adopting IoT solutions. One does not have to “rip and replace” everything to get involved in IoT; in fact, “brownfields” (existing facilities and operations) are where you will most quickly see ROI for your IoT investment.

There is so much you can do with those brownfields to improve end user outcomes, he said, without ripping and replacing.

The things in “internet of things”, Bradicich explained, are a means to an end … to an action, to an outcome.

In the case of an automaker, when you ask the line supervisor “What do you need?”, he’ll respond with “I need to produce more cars by the end of the shift”. That’s the action. That’s the outcome.

The line supervisor did not ask for IoT, 5G, robots, etc., because these are all just things… the means to an end.

And when that’s the case, the benefits of IoT start to make more sense because you start seeing IoT devices, edge computing, the cloud, etc., as just tools in the toolbox for achieving a desired outcome.

Tom provided another example from the aerospace industry leveraging IoT-enabled inspection cameras to check the rivets on an aircraft. Quite simply, are any missing? Then, should there be any issues, the manufacturer will instantly know (via IoT data) everything there is to know about those faulty rivets: What type are they? What technician installed them (or failed to)? What shift?

By the way, the “cloud is just a data centre”, Bradicich said, adding that the edge could anything/everything outside the data centre.

To better explain the edge, he gave the example of an electric utility and one of their generating stations.

That generating station is the edge. The generators, turbines, transformers, backup generators, etc., are all things connected to that edge.

Prior to connected devices, generating station technicians would often rely on their senses to determine whether equipment was running correctly. But when you sensor-up everything, set benchmarks, understand predictive maintenance, you get good data that leads to intelligent business decisions.

Speaking of the edge, there’s a lot going on out there; with the majority of edge data coming from those things in the internet of things.

And there are several good reasons for computing at the edge rather than the cloud:

Bradicich says, in the near future, 80% of data will be acted upon at the edge, not the cloud.

Who better, I thought, to give me a real-world opinion about IoT than the guy who literally wrote the book “The Internet of Things Myth”.

According to Hatton, the average IoT deployment takes about 10 months, with payback around 18 months. “We think that’s pretty short.”

Yet less than 20% of IoT projects are identified as mission-critical, and they’re not particularly complex. In fact, they tend to be low-hanging fruit.

Complexity, says Hatton, is putting off organizations from delving into truly transformational IoT projects. So what’s holding everyone back? What’s stopping us from leveraging IoT to its fullest potential? Hatton answers:

• Stupid ideas, like connected toothbrushes, smart kettles and—believe it or not—$1000 connected irons.

• Implementation. “Sometimes it seems like internet versus things rather than internet of things,” Hatton said. He gave the example of IoT devices on refuse (garbage) bins that let you know when they’re full and need to be emptied. “But garbage is not collected by freelance garbage collectors who wait for a ping. They’re on a schedule, and that’s when they collect refuse … not when a device tells them to.”

• IoT projects are usually deployed by the IT Dept.—which typically doesn’t have much consideration for how the rest of the organization works. This leads to proof of concepts “from hell”.

• Security (or lack thereof) is a systemic problem across the board. Lack of faith in security leads to slower adoption. 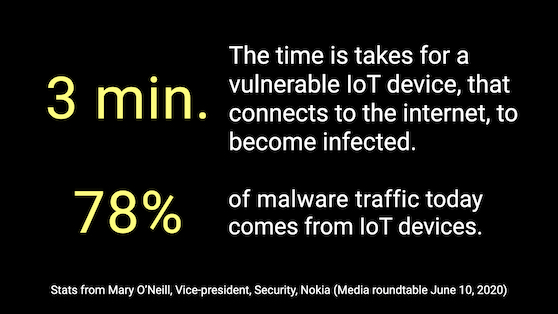 (This reminded me of a Nokia media roundtable I attended back in June, where Mary O’Neill, vice-president, Security, noted 78% of malware traffic today comes from IoT devices, and that a vulnerable IoT device that connects to the internet is infected within 3 minutes. “Part of the challenge is getting IoT device makers to follow standards for security, besides just focusing on the cool science of their device,” she said.)

• Supplier hubris, and their obsession with valuation and moving around in the value chain rather than focusing on delivering real value.

“All this speaks to immaturity in the market,” Hatton said, “But that’s changing.”

To avoid these pitfalls (especially the outright stupid ones), Hatton provided some tips for mitigating these challenges.

• Do your horizon scanning. What tech is out there? What’s coming down the pipe? “Every company is now a tech company”, so keep tabs on your competitors. How are they using IoT technology, and does any of it align with your business? Most importantly, what does it cost you if you do nothing?

• Match your team structure to project needs. Depending on the project, some team members may be better suited over others for seeing it through.

• Maintain flexibility throughout implementation, and change things as needed. Maintain a link between the project manager and overall strategic objectives.

• Your IT Dept. should not be in charge. Period.

• Security should be front of mind. Design from the ground up with security in mind. Don’t even think about adding security later.

• Be prepared for change during implementation and afterward, as successful deployments will impact your processes, possibly your business model, finances, people, partners, systems and culture.

IoT Slam is organized by the IoT Community, which claims to be the world’s largest (23,500+ members) and longest-standing CxO (chief experience officer) community of senior business leaders and IoT practitioners. Their focus is the adoption and application of IoT in commercial environments, while “seeking to understand and contribute to applying the technology or overcoming the wide variety of barriers, inhibitors, and technical and operational issues”.

I’ve never before attended an in-person IoT Slam event, so I have nothing with which to compare this year’s virtual offering, but if organizers continue to focus on that which made this event valuable to me—e.g. top-notch speakers and engaging subjects, the ability to watch both live and on-demand content—then I’ll be back for more.