June 2, 2016 - FortisBC has recognized 10 British Columbia organizations with Efficiency in Action awards for their “dedication to conserving energy”, as they have collectedly “saved enough natural gas to heat close to 150 homes and electricity to power close to 340 homes for a year.” 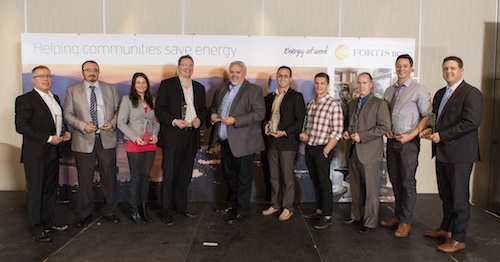 “The attention these organizations have paid to energy use in their projects is impressive — saving energy at this level requires commitment, careful planning and concrete action,” said Roger Dall’Antonia, executive vice-president, customer service and regulatory affairs, FortisBC. “FortisBC works closely with organizations like these to achieve their conservation goals and this is an opportunity to acknowledge their success.”

The awards recognize energy savings in residential building, commercial upgrades and industrial operations. Award winners include businesses of all sizes, municipalities and institutions that have worked with FortisBC to make a significant reduction in their energy use.

For example, this year’s industrial award winner, Andrew Peller Limited, manages both energy and water use while processing the approximately two million cases of wine annually at their Kelowna facility, FortisBC says. Peller achieved its major energy savings when they replaced one large end-of-life boiler with three smaller energy-efficient ones.

“We estimate the typical life of a boiler is 20 to 30 years, so although we are conscious of the initial capital spend, this is long-term play,” said Doug Gallagher, director of operations for Western Canada, Andrew Peller Limited.

After just six months, their boiler project has saved more than 1700 gigajoules of natural gas—that’s equivalent to the natural gas used to heat and provide hot water for 23 single-family homes for a year, according to FortisBC. The company says it’s also exceeding their estimated annual natural gas savings by more than 180% and reduced their water consumption by 10% over the previous year.

Another commercial customer that achieved top honours is Overwaitea Food Group who made energy-efficient upgrades in their Kelowna, Penticton and Nelson stores. FortisBC says their upgrades to energy efficient refrigeration in Nelson and Penticton and conversion to LED ceiling lights at their Kelowna Orchard Plaza store are estimated to save 900,000KW hours of electricity each year.

Through their combined efforts, the 2016 winners have saved an estimated 11,000 gigajoules of natural gas and 3700MW hours of electricity. Congratulations to all!