By North American standards, the project's energy-saving targets are unprecedented outside new construction. 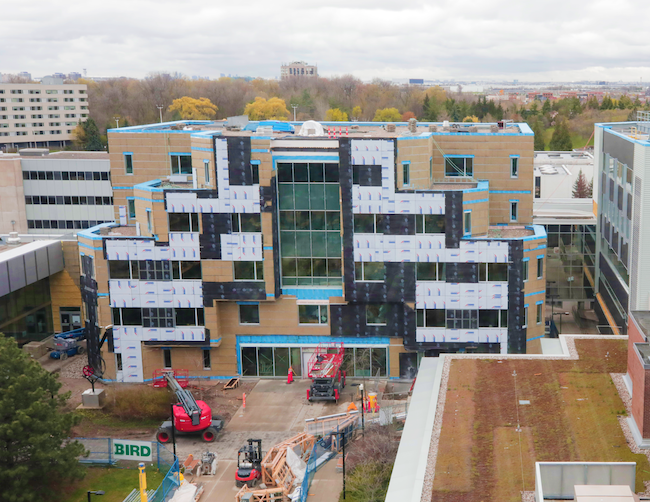 As regular readers of Energy Manager Canada may be aware, Humber College Institute of Technology & Advanced Learning’s NX building in Toronto recently became the first retrofit project in the country to earn the new Zero Carbon Building Design Certification from the Canada Green Building Council (CaGBC). This rating represents both a high degree of energy efficiency and the ability to offset annual carbon emissions with clean, renewable power.

At the time of certification, however, the retrofit was still very much a work-in-progress, which gave us a chance to check out the ‘bones’ of the building before it is completed.

A catalyst for change

Built in 1989, the 48,269-square-foot NX building is being updated with a complete envelope retrofit for airtight insulation, including new triple-pane windows, along with upgrades to lighting, heating and cooling systems and the addition of a 25-kW solar photovoltaic (PV) system.

The renovations were designed by B+H Architects, starting in October 2017, and carried out by Bird Construction, beginning in May 2018 and scheduled for completion this summer.

“We’re immensely proud to be a strategic partner to Humber College,” says Holly Jordan, principal with B+H. “The NX building exemplifies how, through careful integration across architectural design, energy modelling, envelope design and mechanical and electrical design, we can look to Canada’s post-secondary institutions as powerful catalysts for change.”

Once the work is finished, the five-storey tall north campus building will reportedly use 70% less energy than before, which would make it the college’s most energy-efficient facility and, further, one of the most efficient in North America.

“One of the biggest challenges to reducing greenhouse gas (GHG) emissions in Canada is finding ways to heat buildings at a reasonable cost without burning fossil fuels,” says Spencer Wood, the college’s director of facilities management. “We wanted to be an example to the design and construction industries of a deep energy retrofit.”

“As the first retrofit to achieve zero carbon performance, Humber College is showing leadership and innovation,” says Thomas Mueller, CaGBC’s president and CEO. “The NX building demonstrates Canada has the expertise and technology to contribute to global efforts in a meaningful way.” 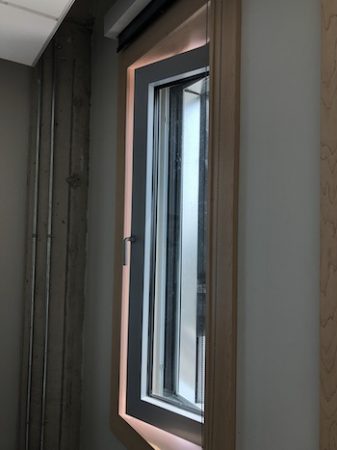 Triple-pane windows have been installed. Photo by Peter Saunders

Amidst the other structures on Humber College’s north campus, the NX building does not particularly stand out as unusual in its design, but its history helps explain why it has been chosen for this first-of-its-kind upgrade.

When it opened, it was a library. Most of its occupants were students passing through during their day.

In 2016, however, it was repurposed as a faculty office building. Suddenly, its occupants were administrative staff, who spent most of the day sitting at their desks—and their comfort became an issue.

As their complaints soon revealed, the NX building became very hot in the summer and very cold in the winter. It also experienced water leaks through its walls. 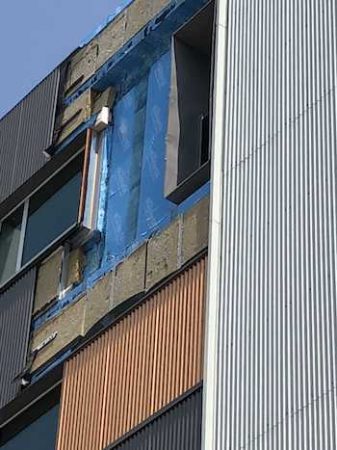 New siding is being installed. Photo by Peter Saunders

Part of a master plan

In response to these problems, efforts were taken through Humber College’s 20-year integrated energy master plan (IEMP)—which aims to reduce the college’s overall energy and water consumption by 50% and greenhouse gas (GHG) emissions by 30% by 2034—to conduct a deep energy retrofit to the NX building.

“The IEMP has financial targets, too, but this retrofit will have a much longer payback period compared to most of the measures the college is taking elsewhere,” Wood explains.

To address the air and water leakage, for example, and to achieve R-40 effective thermal resistance, the building’s new walls feature much more robust construction than the original aluminum curtain walls and spandrel panels they are replacing.

“They are 14 inches thick now,” says Wood. “The wall construction includes a six-inch metal stud and another four inches of spray foam insulation in an interior cavity. On the outside, thermal clips attach to new siding and there’s an additional eight inches of mineral wool insulation.”

This work began from the inside with new drywall last summer, before continuing from the outside throughout the fall and winter.

“We’ve taken off the entire wall and rebuilt it completely,” Wood says. “To stop thermal bridging at the base of the building, we dug down and insulated the foundation. The roof, which had already been replaced, is still intact, although we did fill in a skylight and add eight inches of rigid insulation to fix more thermal bridging there, to comply with ‘passive house’ certification requirements.”

Entirely separate from CaGBC’s certification, the passive house standard for energy efficiency helps ensure a building requires very little energy for heating or cooling. It is sufficiently rigorous that in addition to sealing up the building envelope, the NX building would need new mechanical systems.

“EnerPHit, the passive house standard for retrofits, is very rigorous,” says Wood. “It is recognized as one of the most stringent energy-efficiency standards in the world. It drove most of this project’s design and performance.”

Initial plans called for the existing system to be maintained, coupled to the college’s central utility plant, but because this chiller plant is normally shut down during the heating season, it would have affected the NX building’s ability to provide cooling in winter.

“The envelope is so good, the building is cooling-dominated,” Wood explains. “The heating energy use is projected to be less than 5% of total building energy use. For the average Canadian building, it’s closer to 50%, so this is extremely low.”

To work around the issue, an air-source variable refrigerant flow (VRF) system was commissioned. Instead of the plant’s water loop, the system exchanges heat between zones with the ambient air.

To help keep temperatures consisted throughout the building, two new air-cooled VRF heat pumps were installed on the fifth floor and fan-coil units for each thermal zone.

“Facing much lower mechanical loads, we removed the entire old system and put in the new VRF system,” says Wood. “The refrigerant runs in lines to the fan coils for ventilation, which is much more efficient. In the summer, the same system removes heat to the outside. So, we’re no longer cooling and heating the building at the same time.”

The VRF system and associated controls came online in May 2019.

“We got rid of the air handlers that used to be on the roof,” says Wood. “Everything can be smaller now. Our old ducts were 14 inches in diameter and our new ones are five to six inches.”

Elsewhere, Osram’s Encelium sensor-based lighting control system is being installed to reduce the electrical load even further for the offices’ already-efficient LEDs. A glass vestibule was also replaced to achieve the thermal energy performance standards of EnerPHit, while an electric radiant flooring system was specified for the building’s north entrance, which tends to be colder in the winter months.

One of the final touches will be the mounting of a 25-kW PV system to the roof to collect an estimated 31,500 kWh of solar energy per year. Any excess energy will be fed to the campus’ central plant, for use by other buildings.

“Based on any published data we can find, this will be one of the most energy-efficient buildings on the continent, either new or existing,” Wood says. “It is possible to get high performance out of retrofits!” 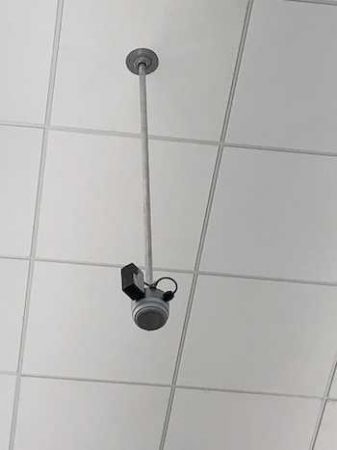 Over the August long weekend, the NX building is scheduled to undergo a whole-building air leakage test (WBALT) as part of the passive house certification process. Since it connects to three other campus buildings, it will need to be isolated for the test.

“That’s a challenge unto itself,” says Wood. “We’ve certainly learned a lot throughout this process.”

Those lessons will also be shared in October at Passive House Canada’s (PHC’s) second annual conference, which will include site tours for attendees.

With files from Humber College, CaGBC and PHC. For more information, visit www.humber.ca, www.cagbc.org and www.passivehousecanada.com.

A slightly shorter version of this article, with multimedia elements, originally ran in the July 2019 digital edition of Energy Manager Canada magazine.