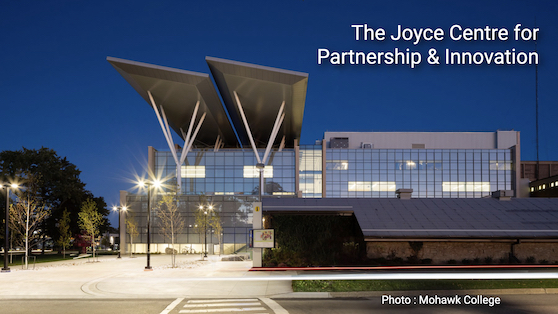 “Over the past three years, The Joyce Centre has exemplified sustainable building operation for students, employees, community and industry partners,” said Ron McKerlie, president & CEO, Mohawk College. “While only labs were active during the pandemic, reducing occupancy and energy demands last year, the performance of this impressive building remains remarkable. Our Facility Services team has continued to excel in the ongoing maintenance, calibration and monitoring of this impressive facility.”

Of the energy used by the building last year, 236,066 kWh was provided by the municipal power grid and, over that same period, 524,795 kWh of green energy was used by other facilities on the college campus. The Energy Use Intensity (EUI) for During this period, The Joyce Centre was 42 kWh/m2, which is 85% lower than the Canadian national median EUI value for college/university facilities, as published by Energy Star.

HIGH-PERFORMANCE ENVELOPE – The building envelope is designed to be as airtight as possible so that heating and cooling systems work a minimal amount of the time if at all. The roof was designed to increase thermal performance, with green areas and surfaces that reflect heat from the sun.

SOLAR ARRAYS – A total of 1980 solar panels generate about 730,000 kWh of energy annually. The centre uses no natural gas onsite.

GEOTHERMAL SYSTEM – Energy is generated and stored in 28 geothermal wells drilled to a depth of 605 feet. Heat extracted from the building during the cooling season is stored underground; during the heating season, it is drawn back up for use in the building.

STORMWATER HARVESTING – Two underground cisterns capture 228,000 litres of rainwater runoff, which is then used in wastewater plumbing and landscaping systems.

Mohawk College says The Joyce Centre is one of the largest net zero institutional building in Canada, offering a “living lab” for students, where they have hands-on access to the monitoring and operations of a ZCB-certified building. Students are able to explore building information modelling, a process of gathering and grouping data from the building’s performance to understand and optimize the design and maintenance during the life of the building.