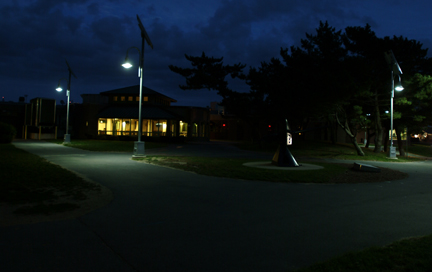 The lights are powered by photovoltaic (PV) panels, making them completely independent of the electric grid. With their own solar power source, the light posts can easily be installed wherever light is needed, without expensive investments in trenching, cabling and repaving.

"We now have a beautifully lit walkway students are using extensively, day and night," said Capt. Allen Hansen, who championed the alternative energy project and is vice-president of operations at the school.

The new lights replace an old assortment of low pressure sodium fixtures and overbearing flood lights, the combination of which left the campus spotty, dark and poorly lit. Instead of adding safety, the old lighting created isolated pools of glare between dark areas. With no underground power conduits, the easily installed PV-powered lights were readily and economically placed along walkways and around the dormitories, which previously had no site lighting.

The new solar-powered LED lighting reflects a larger trend in outdoor lighting. The softer, whiter directional LED lamps provide exceptional clarity and visibility on areas that require light, without sending stray light into areas that are best left dark. The result is an enhanced night time setting, with marked reduction in light pollution and energy usage.

The lighting also supports the Mass Maritime’s commitment to renewable energy and to developing environmental responsibility in their students. Over the past few years, the school has also installed a major 650 kilowatt wind turbine, which serves the entire campus, as well as 81 kilowatts of solar panels on dormitory roofs.

"We searched for a solution that was visible to visitors and didn’t add to the footprint of the Academy," said Hansen. "And it is visible enough, that people who visit point out to us that, ‘hey you’ve got photovoltaic lights, don’t you’. So we can share that story with them."

The lighting project was largely funded by a $325,000 state renewable energy grant to Mass Maritime, supplemented by a $34,000 rebate from the Commonwealth Solar program managed by the Mass Technology Collaborative. The balance of the funding was provided by the Massachusetts State College Building Authority and other Mass Maritime funds.

The fixtures employ round strings of small LEDs to provide a uniform light. The LEDs themselves are housed inside a Hadco Lighting fixture.

The long-lasting LED lights significantly reduce maintenance, and perform well in cold temperatures. The light’s solar panels are positioned to shed snow, and SolarOne’s proprietary SO-Bright Technology, which manages brightness and adapts to low power conditions, ensures that facilities are never left in the dark, even in the darkest days of winter and during extended cloudy periods.

The system is designed to work through about eight very cloudy days, according to the company.
Ideal for pathways, sidewalks, parking lots, and bus shelters, SolarOne® overhead lights are currently in use or being installed in locations as diverse as college campuses, corporate centers and city streets.

"The SolarOne lighting really has met all of our requirements." said Hansen "They’re attractive, they provide a good light for our students in the areas we wanted, and they haven’t added to the expense of operations on the campus."