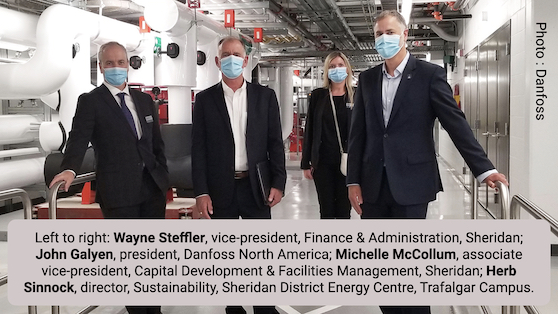 Launched in 2010, the annual EnVisioneer of the Year award competition recognizes North American OEMs, building owners, municipalities, contractors and end users that have introduced a new product, opened a new facility or invested in a building or system upgrade in the past 18 months using Danfoss products or solutions “to realize significant energy and environmental savings”.

In the case of Sheridan, the college is using pre-engineered, factory-built energy transfer stations from Danfoss in its recently upgraded district heating system.

In 2016, Sheridan commenced a three-year project to decommission its nearly 50-year-old steam plant that served six of its buildings with a new hot water district heating system capable of serving centralized heat to the entire campus.

“By converting to a hot water system, we have reduced our annual natural gas consumption by more than 280,000 m³—which equates to an annual carbon reduction of 530 tons.”

By choosing to install packaged energy transfer stations as part of the new district heating system, the period when buildings would be without heat could be minimized, says Danfoss, and multiple buildings could make the transition to the new low-temperature hot water district energy system in quick succession.

“And we expect to further increase energy savings as we optimize and expand the system throughout the upcoming heating seasons,” Sinnock added.

“This is the first time we’ve presented our EnVisioneer of the Year award to an end user for their success in implementing new district heating technology,” said John Galyen, president, Danfoss NA. “District heating offers tremendous opportunity to look beyond the component or building to even greater levels of energy efficiency and decarbonization.”